Suffer the Little Children: the Atrocity at Tuam 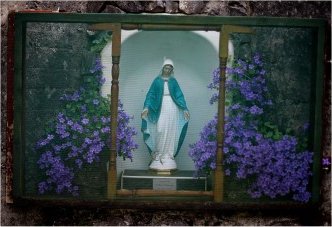 Suffer the Little Children: the Atrocity at Tuam

“His daughters are now in Purgatory, a country of slow fires and ridged ice.  Where in the Gospels does it say ‘Purgatory’?

“Tyndale says, now abideth faith, hope and love, even these three; but the greatest of these is love.

From 1925 until 1961; that’s how long the laughingly called ‘mother-and-baby’ home in Tuam, County Galway was run by the Bon Secours order of nuns.

1961.  It’s that year, that figure that haunts me. That date means that at least some of the 796 infants– whose remains were uncovered in the seventies before being quickly and efficiently hidden from sight and knowledge once more—were buried during my lifetime.

Buried?  Ah, no.  It’s a bit late in the day to be dainty and sensitive about people’s feelings, now isn’t it?  These tiny little mites, these poor broken little children were dumped—unceremoniously dumped, with less dignity than you would give to a goldfish—into a septic tank in a place that is less than forty minutes’ drive from where I live.  Forty minutes; and yet for more than three decades in modern times it has been harder to get information on this appalling testament to human atrocity than it would have been to get details of a mass grave exhumed, after a war, in some country thousands of miles away.

Yet I’m being disingenuous myself here; because the information always was there.  It’s rather that there just never has been the will, cowed for centuries and held in thrall as the Irish were by the Catholic Church, to peel back the curtain on the sanctimonious hypocrisy that they represented. To peel back that earthly veil and take a good hard look at the evil that has been perpetrated in the name of Christ.

1961.  Less than three years after that date, when the last of these infants was being thrown away and disposed of as you would a used tissue, I was starting Catholic primary school.  Amongst many other useless things that we were taught there, was the story from the Gospel of Matthew.  You know the one, about nasty Herod and the Slaughter of the Innocents.  Drummed into us it was, like a lot of other highly questionable baloney; and all the while we didn’t have to look as far as ancient Jerusalem or Nazareth at all; all the while genuine evil was taking place on our own doorsteps.

Nor is it acceptable to blame the Catholic Church in entirety.  For such barbarism as the, for years, extremely successful cover-up of an enormous group of paedophiles (not a small minority, mind you—an enormous and organized group) there had to be links with politicians and police.  At the veryleast they have been guilty of turning a blind eye to the behavior of Holy Mother Church.  At the very least, although I do believe it to have been much more. I believe it to have been active collusion and even participation.  After all, Ireland was then a country ruled completely by the ghastly Archbishop John Charles McQuaid.  So it was a country where anything was possible in the name of God.  Now, it seems likely that this may even have included mass murder.

‘We Can’t Really Judge the Past’.

There aren’t going to be any happy endings here.  No one is going to come out of this looking very good.  What were the fathers of these children doing?  Did they just watch and breathe a sigh of relief as their pregnant lover was dragged off to a life of misery and their child was farmed off to whoever would have it?  Were the fathers’ families equally relieved?  Many must be alive now, having gone onto raise families of their own.  Do they sometimes lie there staring into the darkness at three o’clock in the morning?  Or did they buy into the Church’s wicked teachings hook, line and sinker (as much for convenience as anything else) that the Wanton Woman was to blame for her tempting ways and as the descendent of Eve?  Were these children and the unmarried mothers just embarrassments to be locked away lest they ‘shamed’ a country that considered itself to be the land of saints and scholars?

I can’t recall where I first heard the expression that amounts to wishing that people would turn away from the Church and back to God; I think that it may have been from Irish playwright Hugh Leonard.  But I do know this:

If the Christ came back in the morning he would look in despair at what twisted minds have caused to take place in his name.

I despaired myself as this story once more—because remember, it’s been around since the seventies—had a light shone on it.  For more than a week it was hidden and went almost unnoticed because of the much more important issue of the elections and the extremely important issue of the union of the awful  West and Kardashian dynasties.  (The behavior of certain star-struck fools in Cork at the arrival of these two talent-free yokes was alone enough to make you wish for the extinction of the human race.)  When it couldn’t be ignored any longer because some news outlets had their teeth in to it, as well as the fact that the news was going international, then a damage limitation exercise kicked in almost immediately.

We began hearing ominous mutterings about how high the infant mortality rate was back then in what had hitherto been known as the Good Old Days; although, curiously, no one was rushing to mention how much higher it seemed to be in the areas around the mother-and-baby institutions. Or indeed anywhere associated with priests or nuns, many of whom didn’t want to be priests or nuns in the first place.

Yesterday June 6th I sent the following email to my friend Darren:

“Father Fintan Monaghan, secretary of the Tuam archdiocese, says: ‘I suppose we can’t really judge the past from our point of view, from our lens.  All we can do is mark it appropriately and make sure there is a suitable place here where people can come and remember the babies that died.’

“Jaw-dropping statement of the year.  Ah, sure it was the sixties; we did things differently then.  Mass graves weren’t uncommon.  Wonder if he’ll repeat that at this Sunday’s sermon.  Or if people have the good sense to walk out if he does.  IF there are any mass-goers left.”

What could be seen as flippant is in fact a statement born out of deep anger. What Darren may not have known at the time is that he was closer to the truth than he knew: early ‘explanations’ tentatively suggested that it might have been linked to the original building being a workhouse dating back to the 1840s; or that the dead were victims of the famine.  Damage limitation, indeed.  Is the Church sensing already that this may cost them money, just as those damned paedophile priests who were stupid enough to get caught did only recently?

Because make no mistake:  it may suit Holy Mother Church to talk about the past looking different ‘from our lens’ but one thing that does not change as far as that lens is concerned is their love of hard cash and their dislike bordering on pathological hatred of parting with it.

As far as those in power are concerned, if this latest scandal costs them even one greasy shekel in the collection baskets, then it is a colossal fuck-up that has to be contained at all costs.  If that means lying to their parishioners then it would hardly be the first time.  The end always justifies the means when it comes to this crowd.  And oh how they must yearn for the relatively sedate times when Galway Bishop Eamon Casey was dragged over the coals for being caught sleeping with a very willing adult woman.  Ah, bless our innocence.

I watched a very enjoyable, old-fashioned war movie last night.  It was about a group of allied soldiers during World War II who were attempting to rescue priceless works of Art from the looting Nazis.  It was harmless entertainment except for one part that made me sit up a little straighter and that is when George Clooney’s character points out a work of real beauty.  “This is the Ghent altarpiece.  It is the defining monument of the Catholic Church.”

You know, I don’t really think that’s true.  I think that it is the mass graves at places like Tuam that will one day be considered the defining monuments of Holy Mother Church.

In any case, we will hear more about this dreadful addition to Irish historical fact over the coming weeks and months.  As I write this, the Irish Mail on Sunday is due to publish the results of their own investigation tomorrow.  That alone is disgraceful:  that whilst both politicians and the police wring their hands and wonder whether an investigation is called for, it is left to a newspaper to just go ahead and do it.

And to all of you who are wailing that they are only doing it to sell more copies, well yes:  but without newspapers banging on about it, you would never have known about it in the first place, would you?

Or had you pinned your hopes on the Church finally telling you the truth?