“What were you doing when you were posted to Korea?” I ask Tony.

“I was working on helicopters as an aerial observer.”

Right here is one of the frustrating things about interviewing Tony Slevin, originally from Dublin.  In the past, people I’ve spoken with – hell, people in general – are happy to talk about themselves.  Tony isn’t.  Beyond a polite surface answer to most questions, this guy is pretty much guarded in his responses.  Much is off the record and I’m pleased that I promised him it would be an informal chat or God knows I would be lucky to get anything at all.

“When my brother came to me with flyers for the military I went along with him.  As I’ve said, it was in the back of my mind in any case.  Each branch of the service was in the same building.  Eric, he went for the army.

“I’m not putting one over the other; but for me it was always going to be the Marine Corps.  In my mind it was more of a challenge and I liked the idea of being part of a smaller and more self-contained unit.”

As a movie buff I can’t help but ask him what film he feels reflects life in the Marines most accurately; and there is no hesitation:

“It’s the opening part of Full Metal Jacket, the bit set in the Boot Camp.  No question.  There are other decent films out there, but all of them have some flaws or other, ranging from the very small to the ridiculous.  But that first third of Kubrick’s film nails it.

“I can’t comment on the rest of the movie, because it was set in Vietnam and I obviously wasn’t there, too busy being born.  And the guys in that film were being trained for a war that was ongoing and which they knew they would definitely be involved in, so their training was particularly intense.

“But from the moment we stepped off the bus onto Parris Island our training was really as grueling as you would expect.

“The whole idea was to break you down as an individual – the constant screaming in your face – and to replace whatever you were with something else.  Yet to leave you with enough of the individual that would want to serve in the first place.  It’s only now that I realise how much thought, intelligence and understanding of how the mind works went into that process.

“And of course different drill sergeants had different techniques.  Some would have you singing the Marine Corps hymn before you went to bed.  You’d be in bed by seven in the evening and allowed to read your letters; but ‘free time’ following the training wasn’t really that.  Free time would be polishing your boots and so on.  But that’s what most of us were there for, that discipline.”

I ask him how he feels about the recent controversy over those who can be admitted for service.  This is greeted with a shrug.

“Are you happy with the person who may have to have your back in time of conflict?  That’s what you’re concerned about and where I would see the point to Trump’s issues with transsexuals.  If you have other things on your mind like changing gender – and that’s a pretty fucking big issue — then I would suggest you get that sorted before ever considering a life in the military; because until you do then you can’t be focusing your energy properly.  After that, it’s of no concern to me.

“Everybody starts as a recruit, then you graduate to Private, then 1st Class and so on.  NCO is a harder rank to get to: you have to really work to get the points needed for Corporal. But it gives you more choices afterwards – embassy duty and so on.  I had been thinking of doing that in Yemen as I’d always wanted to see that country. But in the end I went to Okinawa.  I liked the people and felt that they liked us; although there was a token day once a year when they formed a human chain around the base in protest at our presence there.

“After I had done the aptitude tests I was found to be best suited for Logistics and Embarkation.  The helicopter training was tough:  we did simulated helicopter crashes so would have to get out whilst underwater; on two occasions that was whilst wearing blacked-out goggles. ”

It’s typical of Tony that he doesn’t mention that little snippet until after we’ve finished.  My enquiry as to how he could neglect to mention that is met with another shrug and:  “Well, we all had to do it.”

Fair enough, I’m thinking; but not in the world that most of us live in.  Why did he leave?

“It was a four-year contract and you have to go overseas on 6-month stints.  I worked out at 4½ years because I wanted to stay with the same squadron.  Embarkation needed what was called ‘secret clearance’. I wasn’t an American citizen at that point and you had to have had the Green Card for a certain number of years.  That was reduced if you were in the military.

“Regrets now?  Oh yes, to an extent; especially when I’m in contact with friends who went on to see a lot of action.

“As to this stuff on gun control in the US:  I bother little with current affairs.  I’m a guy who reads the paper from the back and has a declining interest the farther I get from the sports pages.

“My weapon was an M-16 a2.  It’s never called a gun; it’s ‘my weapon’ or ‘my rifle’.  I also used an M-9 Beretta pistol which I had to have on the helicopters because of the enclosed space.  But that clown you were asking about, the guy who’s on youtube for shooting a sleeping lion?  That’s not even hunting.  The guys I keep in touch with respect their weapons and know how to use them.  They’ll eat what they kill; it’s not a game for them.  Myself, I don’t keep a gun in the house.  The only things I brought back with me was a souvenir from Okinawa and an engraved Ka-bar knife and sheath that the guys gave me when I was leaving. 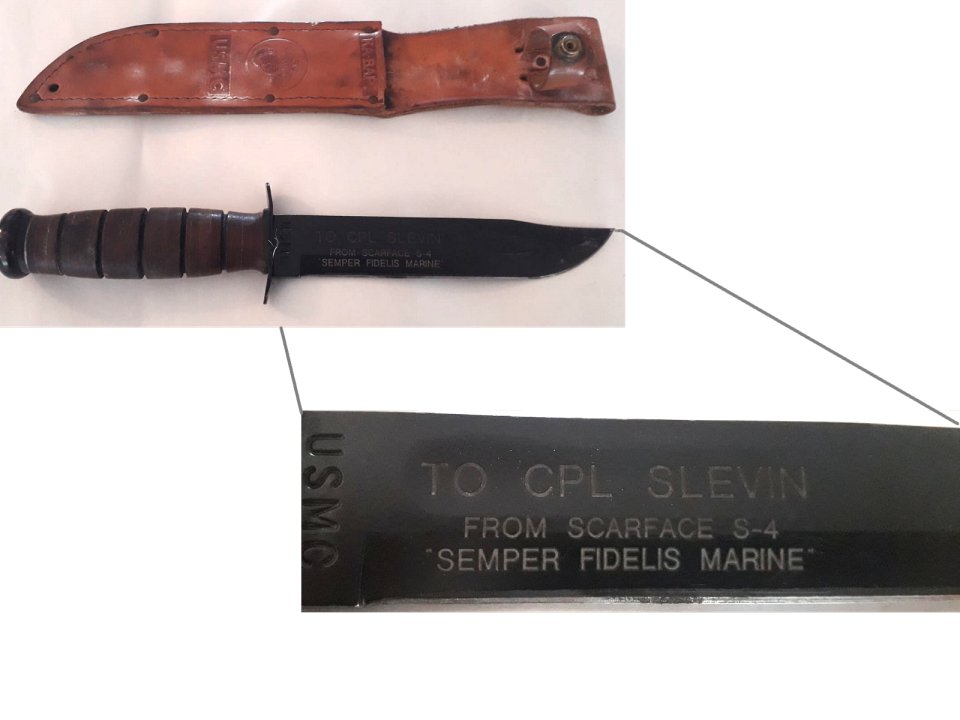 “I wanted to stay in America but my wife didn’t.  And for the sake of the kids it was the right time to come back to Ireland.  But they remain American citizens.”

I’m deeply obliged to Tony for this small insight into what shaped him.  But, for me, what defines him is a conversation I overheard him in some years back.  He was asking someone about how appropriate it would be for his son to play a particular video game.  And he was listening intently.  He struck me as a guy who wanted the best for his son and daughter.

That’s the way he still comes across to me.