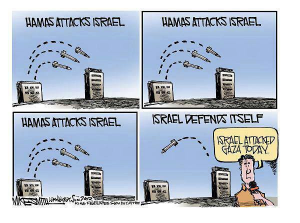 As we mercifully witness yet another ceasefire taking place in the endless conflict between Israel and Gaza, you have to wonder when we (this collective race of human beings) will ever get sense.  What a waste; and yet the usual nonsense of both sides announcing that they have won is a little muted this time around.

“We object to the cease-fire which offers Hamas the ability to continue to grow strong and fight future battles with Israel whenever it feels like it”, he posted on Facebook.

That’s not good; but as a matter of fact, despite the fact that Lieberman is a seriously iffy character, I agree with him in this instance.  Especially when you see Hamas spouting their usual gore-drenched rhetoric.  The appalling Ismail Haniyeh said in that mild and charming way of his that the spilled blood of these past weeks was ‘the fuel of this victory.’

I doubt that’s going to be very helpful.  And meanwhile Ireland still gets four square behind Hamas and comes down on all things Israeli.  I just don’t get it.  And whatever you think of the whole sorry mess you have to admit that it’s a bit rich for Sinn Fein leader Gerry Adams and his crew to be calling for the expulsion of Israeli Ambassador Boaz Modai.  I mean, Gerry Adams?  I can’t possibly be the only one who sees the irony.  In fact, it brings back bewildered memories of SF councilor Matt Carthy calling Israel a ‘rogue state’ as he attempted to stop then-Ambassador Zion Evrony (2006 – 2010) from getting as much as a cup of tea throughout this welcoming land.

The current Ambassador, however, replied to one councilor on July the 18th and he began with rejecting outright the SF expression of disgust:

“Please excuse me if I missed a similar expression of ‘disgust’ from Sinn Fein representatives at the incessant and indiscriminate rocket and mortar attacks on Israeli civilians by Hamas, Islamic Jihad and other terrorist groups…”

Funny, I don’t remember seeing any either.  Maybe all our demonstrators suffer from selective outrage, who knows?  He went on:

“I may also have missed your expressions of disgust at the ever-mounting death toll of 170,000 Arab people, including 10,000 Palestinian Arabs, in the Syrian civil war, or the daily and weekly mass murder of innocent people in Nigeria, Kenya, Somalia, Iraq and Pakistan by Islamist jihadists similar to those of Hamas.  Just now, over 200 Nigerian Christian teenage schoolgirls remain in captivity three months after being abducted and enslaved by the jihadists of Boko Haram.  I do not recall an expression of disgust at this horror, but forgive me if I missed it.”

Again, neither could I; not even as I wracked my brain whilst looking at the ‘Dublin Die-In’.  Then came my favorite part:

“I will not accept a lecture about international law from Sinn Fein, an organisaton with a long record of supporting Palestinian terrorism. [ My italics.]  In my letter to The Irish Times this week, which I would strongly recommend you read, I set out the legal position regarding, on the one hand, Hamas’ indiscriminate attacks on Israeli civilians (in violation of Articles 48 and 51 of the Geneva Convention Additional Protocol) and, in on the other, Hamas’ use of Gazan civilians as human shields in order to maximize casualties…

“The democratic (it is not a ‘claim’ but a reality) state of Israel has as its first duty to protect its citizens, Jewish, Arab and others from terrorist attacks.”

And there is precisely what I don’t get and never will: the overwhelming amount of normally sane people in Ireland who seem willing to forget that Israel is a democratic state, not a rogue one, no matter what Sinn Fein would have you believe.

Then again, in the week that I saw the frankly bizarre film Noah (see sister blog) there’s an awful lot about the world that I don’t get.