The Psychopath Test – A Journey through the Madness Industry

A Journey through the Madness Industry

(Just for a change, I think that this piece belongs on both blogs…) 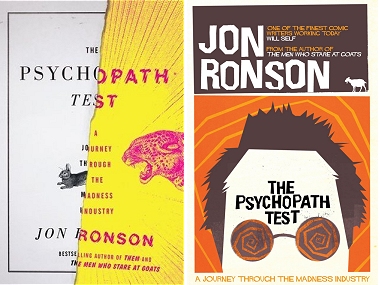 ‘But surely stock-market psychopaths can’t be as bad as serial-killer psychopaths,’ I said.

I wrote an article a while back where I mentioned my personal opinion that the Irish Taoiseach Enda Kenny is probably a sociopath. It’s what I believe, you see: that there are a disproportionate number of sociopaths/psychopaths in charge of our politics, our banks and our lives.  Of course, that is undoubtedly a global truism but since it’s Ireland I live in, it’s the Irish politicians that concern me.

I thought that I was onto something there – maybe no one else had noticed that.  Ah well, turns out I was very far behind; very far behind indeed.   Among several titles where you can read up on the subject, there is Snakes in Suits: When Psychopaths Go to Work by Bob Hare and Paul Babiak.

And there is the one at hand:  The Psychopath Test, which was published by the journalist and documentary maker Jon Ronson in 2011. (Picador.) 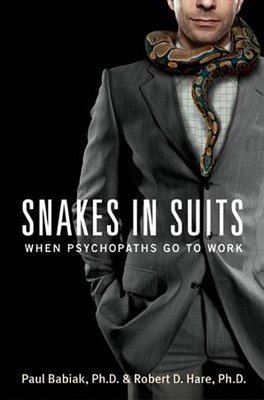 Following an odd, but intriguing opening chapter in which Ronson is called on to solve a peculiar literary mystery amongst a group of rather self-obsessed academics, he introduces us to Tony, a quite singular character who claims to have faked madness so successfully (in order to do a few cushy months) that he has now served twelve years.

It turns out that as far as the doctors of Broadmoor Psychiatric Hospital are concerned it’s a lot easier to demonstrate that you are insane than it is to show yourself to be sane.

Remember R.P. McMurphy in One Flew over the Cuckoo’s Nest?  Yeah, it’s that kind of Catch-22.

Or is it?  Was Tony really just pretending to be mad or was he in fact a genuine psychopath?  After all, he had scored exceptionally high on the Bob Hare Checklist, which is supposed to correctly identify these creatures.  (And incidentally, there seems to be no difference between psychopaths and sociopaths, both terms being used interchangeably.)

And so Jon Ronson set off on a two-year mission to find out more about the entire madness industry — ‘industry’ being the operative word.  Interestingly, he is helped at many points by Scientologists who have an entire department set up with the express aim of discrediting psychiatrists, who they hate with a passion.

And it has to be said that it isn’t long before you actually find yourself on the side of… L. Ron Hubbard’s disciples.  Well, kind of.

As faith in psychiatry grew, certain incidents could only have taken place in 1960s California – ‘home of the liberal fruitcake’ as the great Frank Barone memorably put it. It is here that we find Paul Bindrim and the pseudoscience of Nude Psychotherapy which seemed to get wackier and wackier.

“Bindrim’s most divisive idea was what he termed Crotch Eyeballing.  He’d instruct a participant to sit in the centre of the circle with their legs in the air.  Then he’d command the others to stare at that person’s genitals and anus, sometimes for hours, while he sporadically yelled, ‘This is where it’s at!  This is where we are so negatively conditioned!’

“Sometimes he’d direct participants to address their genitals directly.  One journalist who attended a session – Life magazine’s Jane Howard – reported in her 1970 book Please Touch: A Guided Tour of the Human Potential Movement a conversation between Bindrim and a participant called Lorna.

“There was an embarrassed silence.

We have the nerve to say that Scientologists are cracked?  And wait until you get a load of the radical psychiatrist R.D. Laing and the Shit Room at Kingsley Hall.  As his son Adrian comments:

“Everyone became a patient.  Kingsley Hall was very wild.  There was an unhealthy respect for madness there.  The first thing my father did was lose himself completely, go crazy, because there was a part of him that was completely fucking mad.  In his case, it was a drunken, wild madness.”

The Lunatics in Charge of the Asylum

One would imagine that anyone not from California would have dismissed this carry-on as completely barking-mad, perhaps wondering who was more sane – the doctor or the patients – but not so.  A young Canadian psychiatrist called Elliot Barker thought that Bindrim was on to something…except, you know, that he wasn’t being quite extreme enough.

So, having gotten himself comfortably ensconced in a facility called Oak Ridge he began encouraging groups of murderers and extremely violent rapists to mingle and ‘emote’ together whilst getting them strung out on LSD.  As you do.

Remarkably, when these pillars of the community were freed their chances of reoffending were far, far higher than would be normal.

What a surprise! Who would have thought it?  Yep, by this stage I was definitely emoting myself – as to exactly why the Scientologists thought these clowns were dangerous.  And there’s a sentence I never thought I’d write.

Ronson goes on to describe how after attending one of Bob Hare’s seminars and learning all about the checklist he turns into something of a psychopath hunter himself.  At least in his own mind.

I was more interested to see how the checklist looked when applied to my detested, amoral political favourites.  Well, there is:

Item 7:  Shallow affect – ‘Displays of emotion are dramatic, shallow, short lived, leaving the impression that he is acting.  Yep; Kenny, among many others.  Remember him with those crocodile tears in the Dail a while back?

Item 2:  Grandiose sense of self-worth.  Uh-huh.  Kenny on the cover of Time and throwing those stupid-looking fake punches or talking about being congratulated by people who don’t exist, have two pints in each hand, or both.   Or our beloved Minister for Water Privatization Alan Kelly at almost any time.  Then there’s Martin or Hogan or Noonan or — hell — any of our shower, really.

Maybe we should make the Bob Hare Checklist compulsory for all Irish politicians and, of course, bankers.  Problem is that then we wouldn’t have any.  Is that a problem, though?  I mean, as I write we’re pushing on for 50 days now without a government and the country seems to just be carrying on its merry way in the hands of the civil servants.

“Now, as Bob Hare and I neared Cardiff, I considered his theory about psychopathic CEOs and psychopathic politicians and I remembered Items 18 and 12 on his checklist – Juvenile Delinquency and Early Behavior Problems…

“’If some political or business leader had a psychopathically hoodlum childhood wouldn’t it come out in the press and ruin them,’ I said.

“’They find ways to bury it,’ Bob replied.  ‘Anyway, early behavioral problems don’t necessarily mean ending up in Juvenile Hall.  It could mean, say, secretly torturing animals.’  He paused.  ‘But getting access to people like that can be difficult.  Prisoners are easy.  They like meeting researchers.  It breaks up the monotony of their day.  But CEOs, politicians…’ Bob looked at me.  ‘It’s a really big story,’ he said.  ‘It’s a story that could change forever the way people see the world.’”

Well, that was the story I was hoping to read.  But Ronson doesn’t really go there to any extent.  And he keeps it pretty light, although the darkness does come through.

He does touch briefly on the corporate world and the incredible damage it can do to actual living, breathing human beings (who don’t of course count); but it is the penultimate chapter that again pulled me up, since it concerns the current, irritating fad of everyone and their mother declaring themselves to be bipolar.

Dare I say that this drives me…crazy?  This — and kids who are declared as having Attention Deficit Disorder when they are in fact simply ill-behaved brats with useless, over-accommodating idiots for parents.

There is even a lady called Tracy Anglada who has written a children’s picture book called Brandon and the Bipolar Bear (I’m not making this up), the moral of which is that you should keep taking (and buying, don’t forget buying) the medicine that the pharmaceutical companies are happy to throw at you – for a price.

By a complete coincidence Tracy is also the head of a childhood bipolar advocacy group called BP Children.

Oh – and Tracy didn’t want to be interviewed.

Ronson’s writing style is as breezy and highly readable as it was with Them:  Adventures with Extremists (also reviewed on this blog).  Sadly, for this reader the man himself comes across as no more likeable than he was there.  Which of course is unfair:  he’s a journalist; it’s not his job to be liked.

The main thing that The Psychopath Test has done for me is to whet my appetite for finding out a little more about how dangerously, unfeelingly insane our politicians and corporate movers and shakers really are.

Time, I think, to search out Snakes in Suits…