Proud to have been at the Galway Water March! 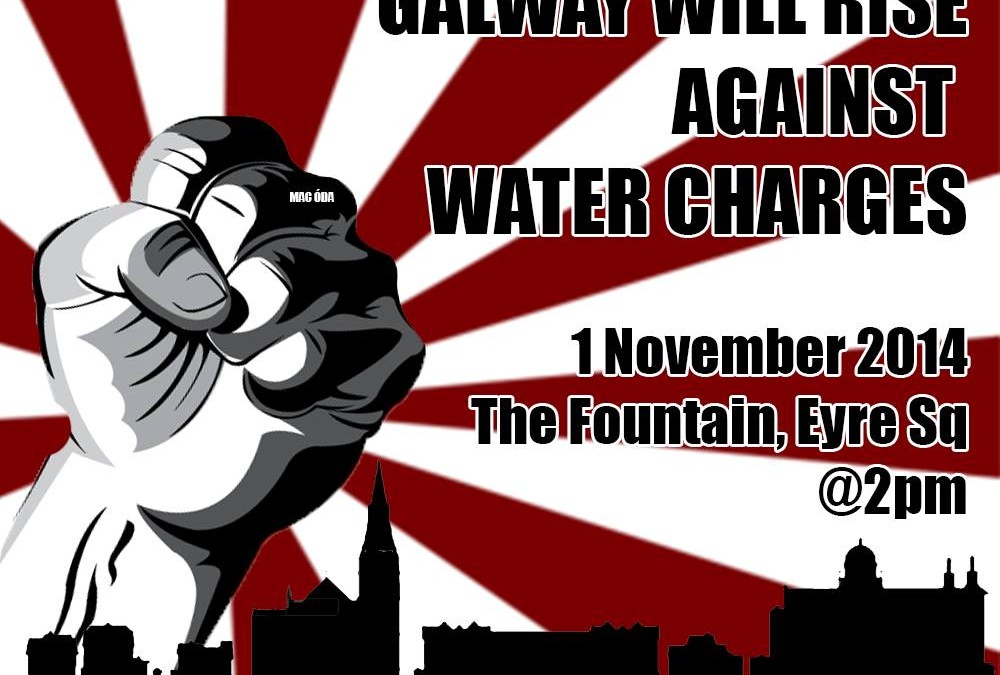 Proud to have been at the Galway Water March!

So what did I learn at the November 1st Galway march in protest against the water charges?

Well, I’m not the most sociable, so marches and demonstrations are things that don’t hold appeal for people like me.  Yet most of the people who were marching right alongside of me were Joe and Jane Public as well.  I’ll bet that many of them had viewed going into Galway yesterday with as little enthusiasm as I had.  So I was learning that sitting behind a keyboard is fine, but that sooner or later you’re going to have to get out there and challenge injustice, especially when it is so wrong and immoral, as in this case.

You folks that were suffering a hangover from the Halloween Party of the night before or who were put off by a bit of rain or who were just too damned lazy to make the effort…well, I’m in no position to pass judgement.  Just don’t ever moan to me on how unfair you think these charges are, because you haven’t earned the right.

Not having any kids, I found it interesting to see so many there.  It makes sense when you think about it.  Their parents teach them (presumably) to stand up to bullies, who are inadequate assholes and that those inadequate assholes tend to be cowardly bullshitters; so a good starting place for this lesson is with our government, who manage to combine the qualities of both.  We got the measure of them in that regard last night, as soon as the march was over.

Enda Kenny, a bullshitter who is so cowardly that he can’t even sit in a room with a tough interviewer like Vincent Brown, immediately started in with the threats:  if we don’t accept the water charges then we’re going to have to accept 4% in tax increases.

Of course, that pig-in-a-suit mate of his, Phil Hogan, had been mouthing the same guff out of him earlier.  Michael Noonan was more patronising, indicating that this was the last little gasp of agitators.

Tell, me this, Michael:  did that look like the last go-around of anything yesterday?

Get that right out of your pointy little heads, chancers:  this isn’t the end of something, it’s only the beginning.  And even though there might – might – have been the chance of compromise some weeks ago, there’s none now.  For myself, I want nothing less than the complete dismantlement of Irish Water, a company of incompetents that have proved they’re just not up to the task; and I want a set-in-stone guarantee (not your word, not your promise, those mean nothing as we know) that we won’t be looking at our water being sold off in a few years time.

I’ve got a few other demands but that will do for starters.

Oh, and Enda?  Don’t think that I didn’t notice that last night’s little threat laid bare the porkies you were telling on May 4th of this year:  it will help the leaking supply and secure top quality drinking water for future generations, you said.

Well, it’s not as if we hadn’t known the truth but thanks for confirming it: it was never about sorting out the infrastructure—if that were the case you wouldn’t be pissing so much money away; it was and always has been about generating revenue.  Hell, you never know when another bailout might be called for!

“The metering itself brings with it an incentive to conserve.  You can turn off the tap.”

Jesus wept.  No wonder he only managed a year as a schoolteacher before going on to the cushier job of politician.

And finally I learned yesterday that it is possible to be rained on solidly for two hours (oh, the irony!) and to emerge from the experience drenched to the bone but happy.  I will never forget the feeling of the hairs rising on my neck as I looked across from Galway bridge to Galway bridge and could see a total crush of people.  (If you want to know how many marched, get RTE’s figures and multiply by at least five).  Here’s how Garrett Archbold put it in a mail to the Galwaylockout Lockout site:

“Now anyone who knows Galway knows the distance… We’ll say there were 7,000, which swelled to between ten and twelve thousand… It broke up again then to about 3,000 who continued the march.

“It doesn’t really matter when people jumped in or cut out; we all took part.  We were all there for the same reason.  We know that up and down the country thousands upon thousands marched with the same thought.”

That about sums up yesterday for me.  See you all in Dublin on December the 6th!

We’re not going away, you know.