Get Your Tickets Now for the EU ‘Titanic’! 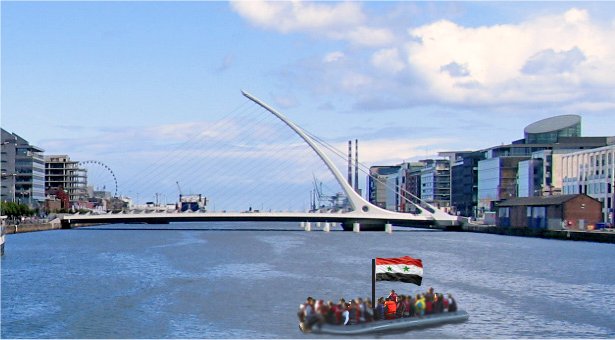 This article is from Chicago’s ‘Irish American News’, October issue.

Well, I might as well just jump in and get started because there’s no way to write this column without getting the usual abuse thrown my way:

RACIST.  That’s always a good one.  If someone has little to say outside of the regular soundbites, but doesn’t like what YOU’RE saying, then what better way to put a halt to your gallop?

XENOPHOBE.  A fancier way of saying the same thing but has the added advantage of in some mysterious way making you sound even more intolerant and barking mad.

ISLAMOPHOBE.  One of those increasingly irritating words that are used more and more by phony liberals, usually speaking from some safe and secure neighborhood.

I’ve heard it all before, although the last one is relatively new in circulation.  I heard them years ago when I expressed doubts on how great it was that we were witnessing ‘a wonderful Arab Spring.’  Now there’s another nonsense term that you DON’T hear much of these days. ‘Arab Spring.’  The desert nations were going to rise up and ‘take control of their own Destiny.’  Well, let’s see:  how did that work out?  Oh yeah, it didn’t.  With the likes of Gadaffi booted out, the Genie was well and truly out of the bottle.  And yet because of the raw power of a single photograph, well-meaning people have been acting as if the refugee crisis only happened last week.

Nor are they all well-meaning.  In Ireland politicians are falling over themselves to show how compassionate they are.  It’s a nice distraction for the peasants, after all.

Take a thousand refugees?  We can do better than that.  Let’s take five thousand – show Frau  Merkel that we’re on her side as she says:  ‘Let’s throw open the borders and let everyone in.’  (Of course she’s not saying that this week; in fact, for once she has been deafening in her silence whilst the Germans are now thinking: ‘What a minute; this is getting out of hand’.)  And here in the West of Ireland Senator Healy Eames is saying: ‘We should be taking 10,000’.

For heaven’s sake, let’s go all out and make it 20,000.  We can always send for the extended families later on.

No thought to what it will be like ten or twenty years down the line when we have to deal with the kind of cultural problems that no one is even thinking of.  You know the kind of thing:  ‘Take down that crucifix; I’m offended.’ ‘We want funding for more Mosques; we’re entitled.’ ‘I want Sharia Law; it’s my culture.’)   And we don’t have to look far, just across the Irish Sea at cities like London or Birmingham, where there are disenfranchised areas that no non-Muslim can go to.

I’m not heartless.  I’m as upset by photographs of dead children on a beach as anyone, although in the case of the photo that has become iconic, people might do well to remember that the father had been living in Turkey for the past year.  That would be the same Turkey that is next up to join the EU.  So: an economic migrant then, not a refugee.

(And here’s a mad idea:  why don’t we start first –since we’re limited by resources in what we can reasonably expect to do – with taking in Christians, be they Coptic or otherwise?  Wouldn’t there be a better chance of them assimilating?)

And that’s the problem:  in our haste to show our Compassion Credentials to the world we’re not really differentiating between genuine refugees and economic migrants who are bypassing non-war-torn countries in order to get to the countries that they’ve taken a fancy to.  At the very least – at the VERY least – we should be processing the women and children first.  Even on the Titanic, to use an unfortunate if not inaccurate analogy, they did that.

Yet when you look at any random sample of photographs or videos then you’ll see groups of healthy-looking young men of military age.  What are they doing – going to send back for the family when they’re nice and safe themselves?  I was bemused at film last week of one group spilling out onto the beach and setting up a selfie-stick in order to take snapshots of their happy day, all posing in their nice comfy lifejackets.  Cameras and selfies; but we forgot to bring the women.  Not that you would know it from RTE coverage:  take a look at that and you would think that Europe was being invaded by beautiful brown-eyed children.  And yet anyone who raises doubts are the ones who are called ‘selective’.

Any Chance of Some Help from the Gulf States?

There’s no end in sight to the four-year-old war in Syria; and YES, we should be doing our best to help.  But we are a small country where we haven’t even gotten to grips with our own homeless situation and a bit of help from the insanely rich Gulf States wouldn’t go astray – at least a bit more than we’re seeing so far.  After all, shouldn’t they be the natural ‘cultural’ refuge of those fleeing?  Shouldn’t they be welcoming their fellow Muslims with open arms?  Well, don’t hold your breath.

“There are some Syrians who have found refuge in the Gulf, especially in Qatar, but they would all generally be on some kind of temporary visas.  The Gulf countries are not signatories to the international conventions on refugee rights that Western countries and indeed most world countries have signed up to…

“Their position would be that if they started recognizing political asylum it could potentially open the doors for a multitude of their temporary workers to stay permanently.  And that would raise a lot of quite complex issues.”

‘Raise a lot of quite complex issues’.  I’ll bet it would.  And if it would raise complex issues in Muslim countries then I can only imagine what we’re looking at here in a couple of decades.  And that’s without even TOUCHING on the fact that ISIS just have to be getting in as many of their crowd as they can.  Hell, they would be crazy (crazier?) not to, considering how soft we have shown ourselves to be.

So for the moment our decisive government has settled on a figure of 4,000.  Or is it 5?  Who’s even keeping count anymore? We’ll watch with interest how this grows in the years to come.  It will cost €12 million per thousand per year.  What can possibly go wrong?

Not to worry: our compassionate political masters have asked the banks to go easy on the home repossessions and evictions of Irish citizens…until after the next election.

And people think that I’m the cynical one?