Dispossessed Lollipops as Pro-Pigeons Senator is Unfair to Seagulls 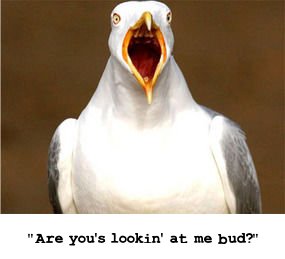 Dispossessed Lollipops as Pro-Pigeons Senator is Unfair to Seagulls

Between my typically shambolic personal life and the global news of recent days, it was a relief to be provided with a laugh from one of our beloved politicians last week. It also made me damned glad that we held onto the Seanad recently.  Our lives would definitely be bleaker without some of them and that is for sure.

It’s true that we don’t normally associate Fianna Fail members with being sources of humour—not intentionally, at least—so kudos to Kerry’s Senator Ned O’Sullivan who has brought up the important question of Dublin’s ‘seagull problem’, which appears to have reached epidemic proportions, at least as far as Ned’s fevered brain is concerned.

The new Minister for the Environment Alan Kelly found himself thrown in at the deep end when the Senator railed on him as to how immediate action must be taken and this scourge on the city way of life be sorted out once and for all.

Of course, for all I know it really is a major problem (although somehow I doubt it) and maybe it was simply the Senator’s unfortunate timing that made it all seem so comical to this Seagull and indeed Pigeon-ignorant layman; but when the item appeared on the RTE Propaganda News it almost felt like a case of:

“Later in the programme:  a Malaysian passenger plane is shot out of the sky over the Ukraine and tensions continue in the Middle East…but first, this important news from closer to home.”  Cue the Seagull Senator evoking childhood fears of Hitchcock’s The Birds as he spoke of devastating attacks on children and of residents being kept awake at night.  ‘They’ve lost the run of themselves,’ squawked Ned.  ‘They’re very raucous.  They’re keeping people awake… attacking young children and dispossessing them of their lollipops and stuff like that.’”

Would this be anecdotal, Ned?  Any hard evidence on the Seagulls from Hell?

As his fellow political chancers cracked up in laughter, relieved that for a change the spotlight was off them (and more importantly off Garth Brooks, said to be notoriously pro-seagull), Ned continued:

“I’ve nothing against pigeons, but I’m very much against seagulls…

“It might be funny to some people, but it’s a serious issue in the city.  They’re not seagulls, they really are vermin.”

And yet, Ned, most people in the beleaguered, under- attack streets that you mentioned, seemed to prefer the seagulls to politicians.