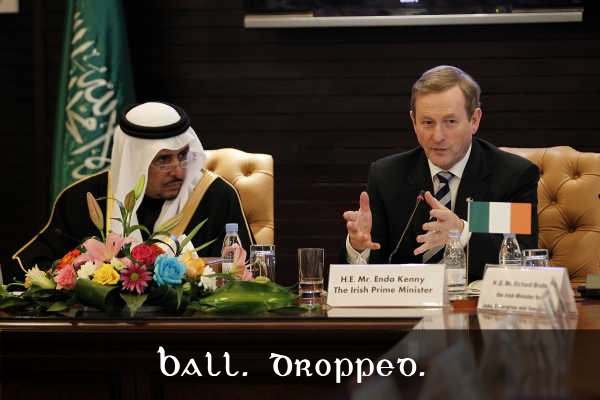 This article is from the February 2014 issue of Chicago’s ‘Irish American News’.

I’m pretty sure that if you take a glance out of the window just before you start this article, there’s a good chance that you’ll see a blue moon illuminating a scene in which a two-headed pig is flying across it.  Look, this contradiction of Nature is not because I’m going to say a lot of nice things about Taoiseach Enda Kenny. I’m not. It’s just that I’m equally not going to join in the general outcry as to why he didn’t lay down the law whilst in Saudi Arabia last week.  [I’m writing this on 13th January.]

As you will probably know by now, Kenny and his Minister for Enterprise John Bruton had thrown their boogie-shoes on and were jiving around the Gulf region on what some cynics are saying was yet another junket but which, in fairness, was a legitimate trade delegation.  After a trip–in the company of representatives from Enterprise Ireland (no comment) — to the Saudi Arabian Chamber of Commerce, they shimmied on to Doha in Qatar, before hitting Abu Dhabi and Dubai to excited squeals of delight from the gathered populace.

[Wait a minute; didn’t Big Phil Hogan do the Celtic Shuffle around Qatar only a few months ago? Wasn’t that the one where his crew of gougers were boasting that they paid for their own drinks?  Ah, never mind; I’m sure there was a very good reason for them being there. And there’s another winged pig gone flying past.]

Anyway, it seems that a lot of people are very upset at Enda Kenny for not going in with both fists swinging, challenging the Saudis on their lamentable idea of what way a civilized 21st century nation should behave.  According to an assortment of politicians and even several ‘human rights’ groups, Enda should have taken this opportunity to make it clear that he doesn’t approve of such things as… oh, I don’t know what they wanted, really.  For him to have a go at his hosts over their frequent executions and their unwillingness to give driving licences to women, I suppose.  That kind of thing.

That’s the problem though, isn’t it?  These were his hosts; he and Bruton were guests.  It’s not as if Ireland is the centre of the world.  And if you’re invited round to your neighbour’s gaffe you don’t go in yelling about the state of the wallpaper.  If it had been a different kind of delegation then I would say sure, we must always raise the issue of human rights.  In this case, though, it would have been ludicrous.

Enda Kenny is a man who avoids debate within the country of which he is Taoiseach so he’s hardly going to slip into his Mighty Mouse outfit in front of a group of obscenely wealthy Arabs in order to read them the Riot Act. And even though I’ve a fairly decent imagination I can’t see John Bruton turning into Secret Squirrel and handing out a lecture to a crowd who might just behead him for his input.

Mr. Kenny did have this to say, though.  He proudly informed us that after meeting Crown Prince Salman at the Royal Palace he congratulated him on the Kingdom’s recent election to the United Nations’ Human Rights Council and added:

“Ireland obviously will work with Saudi Arabia in terms of human rights and their participation on the council.”

Well, obviously. Obviously Ireland will be working closely with Saudi Arabia.  And I’ll bet that Prince Salman, who had possibly only been briefed hours before on precisely who Enda Kenny was, breathed a huge sigh of relief when he heard the good news.

In fairness, though:  what on Earth was the Taoiseach supposed to say?  And if they are honest, what would those politicians who are sniping and scoring some pretty pathetic political points on the back of it have said themselves?  I’m willing to bet that the silence would have been just as deafening.

Anyway, I know that I personally wouldn’t be too bloody happy if a shed load of Muslim politicians stepped off the plane at Dublin and started lecturing us on how we’re running the show.  Can you imagine the outcry if they pointed to Gerry Adams and yelled:

“Whoa!  Didn’t you used to head a terrorist organisation?  We refuse to have any discussion with you!”

Heh.  In fairness, Mr. Adams is on record as saying that he never had any involvement with the said organisation and that’s good enough for me.

No, I’m definitely with Kenny and Bruton on this one.  Especially as I got a few laughs from the whole miserable sideshow.  According to Mr. Kenny, when he went on to discuss developments in the Middle East (something that I would have thought a very dodgy issue to broach), he said:

“I congratulated Saudi on their leadership in terms of moderation (Huh!? Run that past me again) here in the Gulf region and their desire for a peaceful situation on a lot of very complex and technical issues.”

This is where Mr. Kenny shines, really; in the words of the song, he says it best when he says nothing at all and that is certainly what he’s doing here:  saying nothing at all.

There’s probably no truth to the rumour that Crown Prince Salman then pulled out a map and asked Enda to point out to him where exactly Ireland was again in relation to Germany.

It’s OK.  I’ll take that one, Mr. Kenny:  on its knees waiting for Angela Merkel to give us another pat on the head, that’s where.  Or am I talking to people who honestly believe that we’ve done our time and are now coming home to a yellow ribbon tied around the old oak tree?

There’s yet another winged pig gone by!

Whilst I’m on things of a Muslim bent, how disappointing to hear ex-Monty Python Michael Palin, a man I have a lot of admiration for, telling us last week that he would never make jokes about the good-humoured followers of Allah. Yeah, it’s that new thing called sarcasm.

So it’s all right then to poke endless fun at Catholics (I can’t believe I’m defending the religion of my father) and Jews but it’s NOT OK to poke fun at Muslims?  He’s now joined the ranks of the once-admired Sarah Silverman in avoiding this weird no-man’s land.

Timely, because the horrendous season of Awards is upon us once more, when all the once-a-year cinema goers come out of their nests. They’re like the once-a-year-drinkers who show up on the ghastly St. Patrick’s Day just in order to vex people who are sane.

Here’s a prediction for Oscar time: Gravity is bound to get at least one because no one wants to point out that the Emperor has no clothes; and 12 Years a Slave should do really well because it’s about white people being beastly to black people and no one is more fake-liberal than an Oscar-luvvie.  Ah, I’m just being a grouch. I’m really looking forward to that one, especially since the great Paul Giammati is in it.

Europa Report won’t get any because it’s brilliant.  Neither will Mud.

You can tell me how wrong I am at chasbrady7@eircom.net or on my blog at www.charleybrady.com