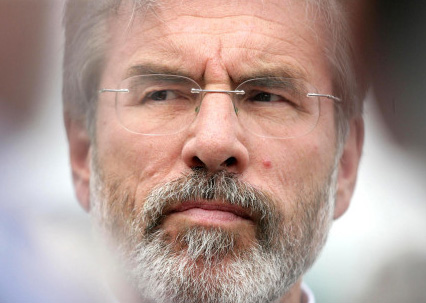 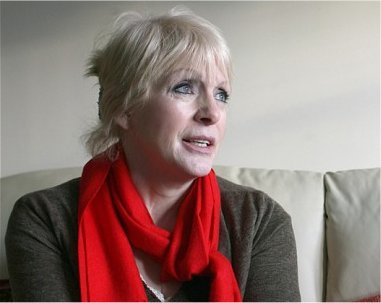 God almighty, they’re just two beauties all the same, are they not? One couldn’t be sincere  to save his life—well, he is a politician these days so I don’t suppose that we should hold being dodgy with the truth against him—and the other one, she tells so much of the truth that I’m not sure you’d want to be in the same room as her. That’s if she is telling the whole truth and nothing but. The truth is that if either of these two told me that Hell was black at Midnight I’d still be sticking my head out of the window in order to have a peer around just to make sure.

They must have been a partnership made in Heaven; or Hell, depending on your point of view.  One thing is certain as far as I’m concerned:  they were made for each other.

There’s Gerry Adams, still denying that he was ever in the Irish Republican Army, to the hilarity of all.  I mean, come on Gerry.  Even those who think that you are the Man Most Likely To Be In Charge In 2016 think that you’re telling little white ones. Why not come clean?  Jesus, it hasn’t done your other half, Martin McGuiness much harm, has it? We seem to like guys with a whiff of the brimstone about them in this country. Don’t ask me why.  I don’t particularly get it, myself.  Maybe I just don’t because as the years go on it seems more and more of a good thing not to get blown to bits by some headbanger fighting for what he considers to be a cause.  And a reformed one?  Sure, some people think that’s even better.

Then there’s Dolours Price, convicted IRA bomber, unrepentant all the way and oh boy, is she a woman with a grudge against our Mr. Adams.

Of course the extent of Gerry Adams’ involvement with the IRA is just one of those things that will never go away.  It’s always puzzled me as to why he has never properly put this to rest.  As one of the guys who pushed through the Peace Process—and being very plausible and good at what he does– he could actually have pulled off a big ‘cleansing of the past’ speech.  There are some awfully forgiving people out there. Maybe he’s gotten himself entrenched too much in the whole business of Denial.  Maybe he feels that it’s just too late now to do a U-turn; and just maybe he’s right.

There are many, many die-hard Republicans in Ireland who feel that they were sold down the river by Adams. It sticks in their craw to see him swanning around in his nice suits, wearing that irritating cheese-eating grin of his whilst rubbing shoulders with those he fought against for years; it irritates some of them, who have been through a lot to put it mildly, to see him being invited to America to hang out, be feted and live the good life.  It bugs them that he denies ever having even been one of them.  And if it is true that he was, then can you blame them?

As long as there are completely disenfranchised people like Dolours Price around then he might as well get used to the fact that this will never go away.  And as long as she is willing to give high-profile interviews to such newspapers as the British Sunday Telegraph then he had better get doubly used to it.

I don’t think that anyone can doubt that Dolours Price is a very bitter woman.  It was also pretty inevitable that she would become involved in the armed struggle in a major way, considering her family background.  Bridie Dolan, her aunt, was blinded and lost both hands.  Not to the British but when grenades she was handling went off early.  Her father was interred by the Irish Government during the fifties.  These weren’t latecomers to the movement, as she says herself:

“It is not enough to say that we were born to be republicans; it’s more precise to say republicanism is part of our DNA.

“In our family, republicanism came before Catholicism.  Growing up as children, we did not have normal bedtime stories of Little Red Riding Hood or the like.  My father used to sit us on his knee and tell us stories about how he had gone off to war in 1939, aged 19, to bomb the English.”

Nice; bloody charming, that is; and very, very sad. Bed time stories from Hades. And yet you don’t get the sense that Price is telling it as anything but what it was like.  Of course she was going to get involved herself, with a background like that.

She and her sister Marian became major players in 1972 and it is along about now that her comments on Adams must be keeping him awake at night.  Seeing the Provisional IRA’s campaign of bombing in Northern Ireland as futile she argued that Britain wouldn’t take them seriously until they started a mainland bombing campaign.  She takes credit for the plan to bomb London and says that this was given approval by her ‘officer commanding’…Gerry Adams.

“I had long been of the opinion that fight as we could, the Brits would let us keep going so long as the death and destruction was kept at a respectable distance from mother England.

“I was convinced that a short, sharp shock, an incursion into the heart of the Empire, would be more effective than twenty car bombs in any part of the north of Ireland.

“I presented the plan to Gerry Adams and he then had to take it to the whole brigade staff—people such as Ivor Bell.  They then had to send it up to the general headquarters staff and then to Sean MacStiofain, then the chief of staff.  They had to discuss and sanction it, which they did.

“For the meeting I sat on the arm of Adams’ chair.  Adams started talking and said it was a big, dangerous operation.  He said, ‘this could be a hanging job.’

“He said, ‘If anyone doesn’t want to go, they should up and leave now through the back door at ten-minute intervals.’  The ones that were left were the ones that went.  I was left organising it, to be the OC of the whole shebang.”

The targets chosen, for obviously symbolic reasons, were Whitehall, the Old Bailey, New Scotland Yard and a Westminster army recruiting office.  There were warnings given and two bombs were defused. The remaining ones went off in Whitehall, injuring 33; at the Old Bailey over 200 were injured and one man died.

Given her upbringing, it is up to this point that I can have some understanding, even of sympathy, with Dolours Price.  But after this, she loses me totally. Of the victims she says:

“There were warnings phoned in but people had stood about, curious to see.  Some had even stood at office windows and been sprayed by broken glass when the car blew up.

“In Belfast, everyone is well enough up on their explosives to know you always open windows to minimise the shock waves.  Well, this was London and its people were only novices.  In Belfast we gave 15 minute warnings; in London we’d given them an hour.

“If people ignored the warnings and stood around gawking, they were stupid.  The numbers of injured came about through curiosity and stupidity.”

Now there’s your quintessential bloody ‘freedom fighter’ for you! Right there! You get blown to bits when a bomb goes off? You’re stupid! Why didn’t you grow up in Belfast where they minimalise the risks?

You’re not “well up on explosives”? Well, it’s not our fault. We’re only the heroes who plant them!

And you know, it’s not as if Dolours didn’t get a fair shake from her sworn enemies.  After she was jailed for life she and several others began a hunger strike which led to them being force-fed.  However, when British Home Secretary Roy Jenkins condemned force-feeding quite rightly as “a barbarous practice” they were moved to Northern Ireland. Eventually Price was let out on humanitarian grounds because—and forgive my cynicism at this– she suffered from anorexia nervosa.  You couldn’t make it up.

Yet still her own words betray her for me:

“Make no mistake about it, when I made the decision we’d be on hunger-strike, I had a vision we’d starve to death, it was that simple.  I was carrying my cross for Ireland and heading for the martyr’s crown.” [My italics.]

That same old contemptible, witless, barbaric God-damned half-yearning for the blood sacrifice that we Celts for some twisted awful reason have always seemed to be half in love with!

I was carrying my cross for Ireland! Jesus, it makes me want to eat my own vomit!

Then, having served eight years of her ‘life sentence’ she was out and within three years had married actor Stephen Rea.  To prove that life can never be too ironic, Rea was one of the guys who dubbed for Gerry Adams during the ludicrous broadcasting ban of the eighties.  They divorced in 2003.

Adams, of course, continues to deny everything. At this stage I’m pretty sure that he’d deny things that you haven’t even accused him of yet.

“Gerry Adams, who is currently in the United States to attend the Clinton Global Initiative at the invitation of President Bill Clinton, has rejected again, as he has consistently rejected, the allegations contained in The Sunday Telegraph interview.”

To tell you the truth, if I were one of the old ‘alleged’ comrades that that he is now denying I would be bit pissed off as well.

And just while I’m at it, America:  just why are you, who have so recently suffered from terrorist attacks both from within and from without, even inviting a man who has such questions hanging over his head?

So of the two of them, Adams and Price, who would I rather be sitting next to at a dinner? Please God, neither of them. I’m sure that Gerry would be the more entertaining and civilised.  He’s good at that.

But of the two of them, I think it’s the damaged and angry Dolours that I would avoid the most. And that’s a funny thing, isn’t it? Because, cards on the table:  I believe what she is saying concerning Adams’ actions in the seventies.

And that’s just my opinion.  It still wouldn’t make me want to hang out with either of them.