Arming the Enemy with Our Own Weapons 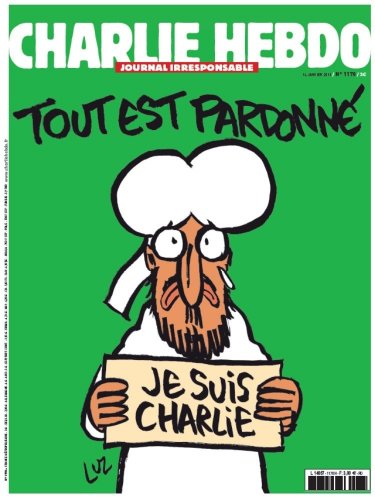 I normally have a fairly happy outlook on life, trying – not always successfully, but trying – to see the funny side of even the darkest situations.

These past days have been different, though. What happened on the streets of Paris this week would strain the efforts of most people who hope that sanity and reason will win through in the end.

Perhaps it’s because many of us have walked those same streets; and even for those who haven’t…well, it’s a little too close to home.

Let’s take a look at something even closer, shall we?

In the aftermath of the Paris atrocity Dr. Ali Selim, one of the leading lights of the Islamic Cultural Centre of Ireland said that he would use Ireland’s archaic blasphemy laws in order to prosecute anyone reproducing the satirical cartoons that were first published by Charlie Hebdo. Well, if you leave weapons like that lying around then slippery customers like Dr. Selim will pick them up and use them against you.

He was careful to condemn the killings, which surely proves that he has learned the art of stealth because he hasn’t always been quite so accommodating. Despite the fact that people are reacting as if this was the first occasion in which the good doctor had offered an opinion, he has been around a long time. He is a lecturer at Trinity College Dublin and at the Mater Dei Institute, as well as being the author of Islam and Education in Ireland.

As long ago as 2003 he was a guest on the Late Late Show where Pat Kenny tackled him on his qualified remarks concerning the destruction of the Twin Towers. Attempting to elicit an unambiguous response, Pat Kenny asked him: “So there is no justification for September 11th?” to which Selim replied: “That is another political issue I do not want to touch.”

He was less hesitant on Vincent Browne’s then RTE radio programme where he helpfully suggested the introduction of Sharia Law. He has also spoken of ‘long cherished Muslim ambitions in Ireland’.

He has previously refused to condemn the stoning of women for adultery in Islamic countries as he considers it ‘symbolic’. At which point words, uncharacteristically, fail me.

I tend to be wary in general of grinning men in suits who assure me that they only have my best interests at heart; but I think that I’ll reserve a special level of skepticism for anything that comes out of Dr. Selim. He may not be as blatant as the obnoxious Khalid Kelly, but he’s far more dangerous. It’s always the quiet ones you watch out for.

Incidentally, the charming Kelly this week accompanied an image of the policeman in Paris being shot by retweeting: “We will cut every lying rotten tongue and kill every liar that dares to insult our Prophet.”

Well, with that fool, what you see is what you get. I suspect –well, hope-- that most Muslims are embarrassed by him. Much more insidious is the fact that the Muslim Brotherhood has quietly but very effectively insinuated itself into Irish society over at least the last twenty years. (And I don’t mean by joining us for a pint in the local.) There are those ‘long cherished Muslim ambitions’ to consider, after all.

I don’t know anyone who laughs harder than the Irish at Father Ted or Monty Python’s Life of Brian. It’s called having a sense of humour. And the ridiculous is always fun to laugh at. Nor to my knowledge has the Jewish community ever gotten up in arms over a performance of Shakespeare’s Merchant of Venice with its stereotypical Jew as a main character.

Yet instead of getting over themselves, people like Dr. Selim would stop us from having a wry smile at a couple of cartoons.

Normally an image of the offending cartoons would have accompanied any article on what happened in Paris this week. However, the newspapers in both Britain and Ireland have played it safe. And I don’t blame them. Publishers and editors have their staff to think about. I may not be happy at seeing an article presented differently because of fear, but that’s the reality of the situation as these extremists have created it. (And by the way, I’ll listen to the ‘moderates’ when they have organised marches of Muslims in their thousand to condemn those extremists.)

However, since I’m the writer and editor of this little blog, with a total staff of one (me) I feel no such reticence. I dislike being told what to do at the best of times.

On prosecuting writers, Dr. Selim says: “If the law gives this right then definitely reproducing these images would be against the law and would be breaking the law.”

Here is an example of the offending cartoons, along with some others that make me smile.

If Dr. Selim should see this and feel the need to prosecute me, then so be it; because it’s the only way he’ll shut me up from saying what I feel. And I don’t even think that will do it.