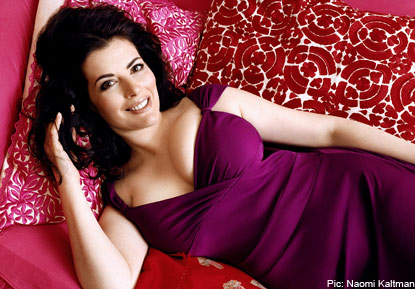 Random Thoughts of an April 3rd

Well, they do say that timing is everything; at least I’m sure that the finally-resigned Angela Kerins, that ex-Rehab boss and inexplicably arrogant, full-of-herself enemy to charities everywhere, would have hoped so.

After all, she arranged her resignation, following long months of dithering–it’s hard to let go of that golden egg-laying goose–to coincide with the motion of no-confidence in our beloved Justice Minister Alan Shatter.  Let’s be honest, though: given how very interested Angie has caused us to become with her shenanigans, it would have taken the Big One hitting LA for us not to be riveted to what she’s up to now.

Oh, some of you trusting souls will be saying that it’s just a coincidence, that the dates had already been set.  Me, I’m like that Sigourney Weaver character in Red Lights:  When I hear the sound of hoof prints I don’t think unicorns, I think horses.

It’s been quite extraordinary, the manner in which she has approached ‘guarding her privacy’ over these past weeks.  I mean, I wouldn’t have thought that it was a good idea to have your lawyers send letters to our elected representatives in order to tell them—tell them, mind you–to cease and desist from asking questions that the overbearing Angie doesn’t like.

Nor would I have thought that it would have been a great move to instruct those self-same lawyers to get onto the States and attempt an attack on their First Amendment.  I mean, talk about shooting yourself  in the face!  Listen, Angie; our American cousins may have their faults but one thing that you can’t take from them is their unshakeable conviction that they have the right of free speech.  Angie doesn’t agree with that; but all that her endearing little Letter to America meant was that suddenly there were tens of thousands of people who had never heard of her suddenly wondering who this big interfering ‘ould Irish wan was.  Dear oh dear.

No, I wouldn’t have thought it was a great idea in the slightest.

But what do I know? I’m not on the sweet, sweet €240,000 a year that Angie’s on; and that’s before you even get into the whole slippery business of platinum cards and swanning around in helicopters.  As one does.

As one does, indeed.  Fact is, I feel like adopting the Royal ‘we’ every time I mention Angie.  The overbearing feeling of entitlement that drips from this ghastly, grasping ‘charity worker’ would leave Pee and Beverley Flynn in the Ha’penny place.  In fact, as I watch her swagger around the gaff as if she doesn’t have a care in the world, I find myself reminded of a phrase that my old buddy Bernard Clarke once used to describe Marlon Brando in his latter years:  “A walking mass of contempt.”

Fine Gael’s Simon Harris seems to be worried that she might ‘decline’ to appear before the Public Accounts Committee in the future due to the fact that she is no longer an employee of Rehab.  I doubt that, myself; but take a look at the wording of her resignation statement:  note the expression “increasingly concerned about the toll that public controversy has taken on the Rehab group and my own family.”

Oh yes, I do think that we might be ripe for a serving of the old ‘can’t appear because my health has broken down with the worry of it all’ codswallop.  She would hardly be the first greedy grasper to pull that one.

Fare thee well, Angie.  Don’t forget to get out your Silver Linings Playbook and let us know what your severance payout came to.  After that, be sure not to let the door hit your ample arse on the way out!

And what about poor old Nigella Lawson, eh?  What a bloody awful twelve months she’s having.  All the business with that wizened, appalling old control freak Charles Saatchi, whom she made the humungous mistake of marrying; and now she’s gone and got herself barred from entering the United States.  Something to do with admitting taking cocaine in court.  Well, presumably not in court but admitting to the court that she had taken cocaine…ah, you know what I mean.

I can’t say that I blame America for not wanting another druggie entering the country, that’s their business; but I’ve a feeling that they have quite a few home-grown celebrities hoovering happily away.  And since everyone and their mother seems to have known (hindsight is wonderful and all that) about Philip Seymour Hoffman it kind of makes you wonder how he was able to travel around so easily.  Him and about a thousand others.

Ah well, if the truth be told, I have no great interest beyond the fact that Nigella is rather curvaceous and fanciable.  Which gives me an excuse to print a photo of her.  Cheers!