Images from the Budget: They really are Fat Cats 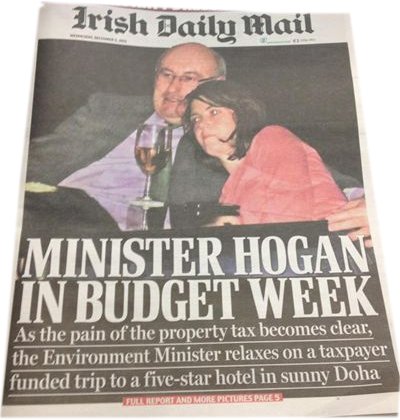 Images from the Budget: They really are Fat Cats

There’s quite a few defining photographs that emerge from the latest assault on Irish sensibilities relating to this 2012 budget; quite a few that illustrate  this most recent of kicks in the teeth to people who are being punished for the sins of the bankers and the inability and incompetence of our cowardly, German-whipped so-called Irish government. I’ll limit myself to a couple of them, in the interests of space and not belabouring what everyone can see for themselves.

One is the photograph of Environment Minister and all-around verbal thug Phil Hogan relaxing after another tiring day on the junket trail of Qatar.

[/pullquote] He looks exhausted, all right.  He’s reclining on some comfy lounge seat with a very large glass of some red concoction in front of him and his aide Yvonne Hyland is lying with her head on his chest whilst he has an arm around her.  Of course I have no way of knowing whether Ms. Hyland is good at her job or not; but the 32-year-old aide certainly seems to be very good at helping the 52-year old Hogan get his gloating, smirking, repulsive laughing gear around some alcoholic beverages.

It’s hard to tell what she’s thinking:  perhaps her thoughts are not on the great time that they are having out there but on the people of Ireland who have just been shafted once again.  Perhaps she is ‘feeling their pain’ as she has been told to feel, for the sake of putting on a show.  Somehow, though, I doubt it.

It’s not hard to tell what Hogan is thinking of course, judging by the I-get-away-with-it-again look on his smug ignorant face.  It would appear likely that he is simply enjoying his time in the sun, and when it’s over—in more ways than one—he can look forward to a nice healthy pension for doing nothing more than inflicting pure grief on his own people.

And what are they attending?  Well, it’s a conference on Climate Change. You probably guessed that.

I mean, if was a toss-up between sitting there pretending to listen to nonsense about climate change or being in Ireland doing your job when the axe falls on the middle classes and what he considers to be the ‘lower’ classes, then you know that goons like Hogan will take the easy bought-and-paid-for option every time.

Jesus wept, but these creatures really are irony-free zones.  Whilst the climate in Ireland changes from simple despair to utter despair he has ten of his cronies flying out to talk about the poor old polar bears, whilst he is on €5,000 round trips for him and his buddies.  That is not to mention the €16,000 accommodation tickets for staying in the five-star—of course!—Hotel Kempinski in the capitol of Doha.

But don’t feel to envious, you doubters!  He is actually paying for his own booze.  Well, that’s what we’re told, anyway; and you know that a politician or the spokesperson for a politician would never lie, don’t you?

One of his flunkeys from the Department of the Environment softened the blow for us by proudly announcing:  “Anyone having drinks of the alcoholic variety bears the brunt of the cost themselves.”

Get a load of that!  “Bears the brunt?” Are you for bloody real?  The cost was €55- for the round! Fifty-five damned Euros and that is only because you were caught on camera!  And as for “having drinks of the alcoholic variety”, are you seriously taking the piss?

When did you ever know a politician or a political hanger-on to have any other kind of drink, especially if they thought that they could slip it on to the tab without being caught?

You think about that, Ms. Hyland, as you snuggle up to someone you perhaps think is just a big cuddly teddy-bear of a boss. You have a look at this guy’s recent past. His attitude towards women is hardly what you lot, in your latest buzz-word, would call ‘progressive’, now is it?  Some big old arrogant teddy-bear, all right.

Pigs Get a Hard Deal by Association

Shame on you, Ms. Hyland; and I say that only to you because who knows?  You might be a decent enough person who landed in with the wrong crowd.  I don’t say it to him, of course, because Hogan has no shame. None, whatsoever.  Pigs, for Christ’s sake, want to have their names changed for fear that they are associated with him.

Whilst back here Respite Carers have been singled out, single mothers have been brought into their sights, and pensioners know that they can let the property tax slip because, sure, Enda and Company can always just take it out of your estate when you’ve shuffled off the mortal cord.  So, there’s nothing much to worry about there then.  The Tomb Raiders may be completely uninterested in your suffering but they’ll get you when you’re dead anyway; isn’t that right, Joan Burton?

Then we have the astonishing photographs of Michael Noonan, grinning like a damned hyena.  There is his big bald head and there is his big bold grin:  I swear, you would have thought that he was about to bestow favours to all and sundry. He has his overweight portly body squeezed into some ill-fitting suit that emphasises his overfed arse and not a bloody care in the world.  The only thing that shows that this fella is supposed to be a leader handing out a savage budget is that little brown case in his pudgy hands.[pullquote]

And even that looks second-rate.

Whoever said that politics is show business for ugly people absolutely nailed it.

I wouldn’t mind if they were just unfit to be photographed like consecutive Health Ministers such as Death’s Head Mary Harney or Turncoat Dr. James Reilly.  If they had just even a little bit of compassion I wouldn’t care if they weighed twenty-two stone instead of just twenty [my approximation].

Am I upsetting you?  Is this too personal?  Well, I could care less because what these champion clowns have done and are doing to us is ten times worse than their ridiculous body weight.  And it is very, very personal to us.

I hope that after yesterday we’ll see the tide turning.  I hope that we will see a people become strong again.  And I hope that the likes of graspers like Phil Hogan and Noonan and their increasingly invisible boss Enda Kenny and his stooge Gilmore find that it isn’t so easy to just walk way, stick two fingers up to us and grab a nice pension.

On the day that this happens, Ireland might—just might—regain a little dignity. 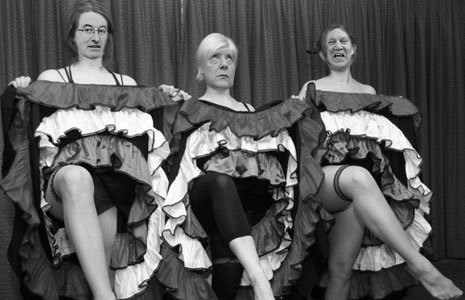