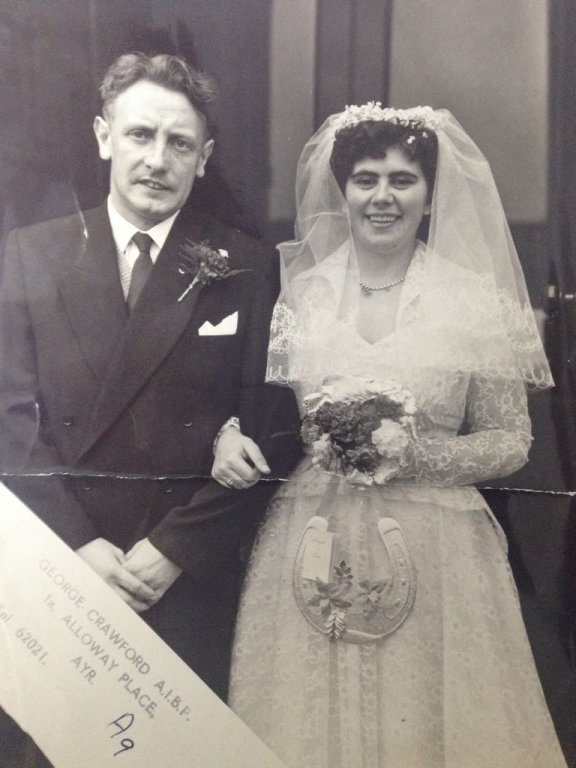 It’s not the earliest memory I have of my parents, of course it isn’t; but it’s certainly one of the nicest.

There was my brother Donald and me – he, six years of age and me, eight – in the back of my dad’s old Ford Zodiac.

Crazy, the things you remember.

I loved that Zodiac because of the little fins it had on the back of it. I was already into science-fiction and it made me think we were being sped along in that underwater vehicle from Gerry Anderson’s 60s TV puppet show ‘Stingray’.

And we were coming back from a day on the beach at Ayr, Scotland.  I can’t remember what sort of messing around we were doing in the back; it was probably annoying our little brother Tom, who was four.

But in that vague way you have when you’re that age, you always have your big ears open to what’s going on with the adults – the grown-ups – the ones that make life safe for you; not that you think of it in those terms.  But whoever first coined the phrase: ‘Little pitchers have big ears’ had the right of it.

And we could hear Tom and Agnes ‘Nan’ Brady — our parents– talking back and forth about the lovely day we’d just had.

I can still remember Donald and me just stopping – one of those magic moments of stillness that you never ever forget – and looking at each other, this pure glow of happiness about us.

It’s a rare thing that, to witness pure contentment in your parents. It was more than that.  It was wonderful.

Tom died fifteen years ago, happy that he had instilled a love for Ireland in me. I moved away initially from Scotland in 1977, doing the hippy trail through Europe.  And, as was to be a constant in my life, it came about because of a book:  James Michener’s 1971 The Drifters.  I wanted to see all the places in that book and I did.  After that I couldn’t settle and with Tom’s tales of Ireland ringing in my ears I came here in 1979.  And Ireland has been my home since, something that my father loved.

Well, it gave him a chance to visit at every opportunity.

He had been in the navy as a young man and travelled more extensively than my brothers and I ever knew, until we found his journals and his poetry after his death.  I had inherited his love of travel without knowing it and in fact was then working as a travel writer.

But I wish now that I had listened more closely to HIS travels.

You never do though, do you?  You never pay enough attention to your parents until it’s much too late.   And then you only have the rest of your life to regret not doing so.

On the 5th of July, at the age of 82, Nan had a major stroke.  She has survived it, thankfully, although it is going to be an uphill struggle for her to get back to where she was.  My brothers and I travelled back from the various parts of the globe we were in, the first time we’ve all been together since Tom’s funeral.

Nan – my beautiful, bloody-minded, independent mother – is temporarily laid low.  I can’t believe it.  None of us can.

But being back together, what memories have been opened up!  They gave us one hell of a terrific childhood, Tom and Nan did.  And I want her back on her feet as soon as possible, so that we can tell her that.

We HAVE told her, over and over; but it seems to me now that you can never tell your parents enough, how much you love them.

I hate to see her like this.  She has always been the most aware of women; don’t let old age make anyone think any different.

There’s a passage in Paul Scott’s The Jewel in the Crown that I’ve always loved and I thought of it when I saw her lying in that hospital bed, a billion memories trapped behind that unprecedented silence, those still-vibrant brown eyes:

“…intense sunlight, deep and complex shadows… The textures of the leaves are many and varied, they communicate themselves through sight to imaginary touch, exciting the fingertips:  leaves coming into the tenderest flesh, superbly in their prime, crisping to old age; all this at the same season because here there is no autumn.  In the shadows there are dark blue veils, the indigo dreams of plants fallen asleep, and odours of sweet and necessary decay…”

We had to make the decision, since Nan couldn’t — silent for the first time that we can recall — to go through her things.  What sheer intrusiveness it has felt!

There are the photos of her and Tom, young people starting out on their life together at a stage where none of we brothers even existed.  That’s a strange feeling, to see these two people that we only ever knew as Mum and Dad, at that point.

And to come across my dad’s vast, eclectic range of books!  He was down the pits as a miner at the age of thirteen (something that today we would surely call child abuse); and when he decided that it wasn’t for him, out and join the navy.  So he was a self-educated man.

And Nan still has all of his books, ranging from his huge collection on the Celtic football club to his love of the sea with Rosie Swale’s Children of Cape Horn through Chichester’s The Lonely Sea and the Sky to his endless fascination with Native American Indian history:  biographies of Sitting Bull, Geronimo, two copies (for some reason) of Dee Brown’s Bury My Heart at Wounded Knee; or his books that showed his delight in the Battle of Little Big Horn.  He always liked to see the underdog winning, did my dad, probably something to do with his Irish heritage.

No, we just don’t appreciate them enough when we should, any of us.

I’ll leave you with one of Tom’s favourite passages, from poet John Masefield:

“I must go down to the sea again, to the vagrant gipsy life,

To the gull’s way and the whale’s way where the wind’s like a whetted knife;

And all I ask is a merry yarn from the laughing fellow-rover,

And quiet sleep and a sweet dream when the long trick’s over.”

And that marvelous memory I’ll always have of Tom and Nan, when she asked him what his happiest time was, after a simple day on the beach:

“This is. This is the happiest time in my life”.