Ireland: The Frog in the Pan of Cold Water 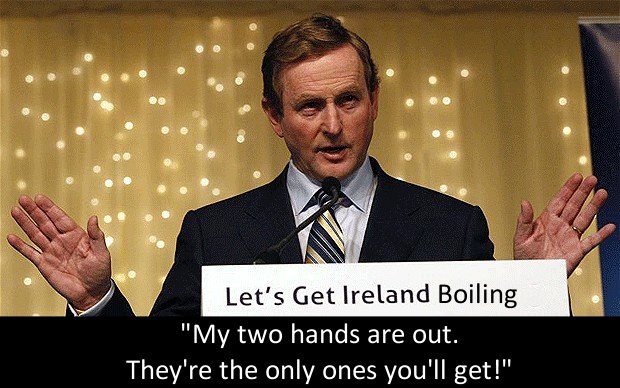 Ireland: The Frog in the Pan of Cold Water

“I do believe in Justice; I believe in a man’s word. And we must have some form of Law.  So when it’s broken, I have a tendency to stand up and fight.”

Little by little, Ireland is being sold off. One day – not too long from now – we will come groggily awake from our collective coma and discover that our country is gone.

Some time ago we stirred in our sleep, dreams disturbed by a feeling – just a feeling, mind – that our oil had been given away.  It wasn’t even sold in any way that we could really understand.  One moment it was there and the next it was gone; evaporated; lost in a puff of smoke and sleight-of-hand; and we would never benefit from a happy accident of geography in a way that other, more savvy countries had.

But that was all right. Because surely our government was looking out for our best interests in the long run.  Everything was OK.

This past week we blinked open one bleary eye to discover that a Canadian company now owned our national lottery and there was nothing that we could do about them skyrocketing the price of playing, whilst simultaneously diminishing by enormous odds our chances of ever being one of the lucky winners.

Well, that’s only a game and it’s your choice whether you buy a ticket or not.  But for many it is a dream of having the endless burden of wondering how they’re going to pay for whatever tax is invented next, eased just a bit.  Just a little bit.

It’s nice to have dreams.  But dreams only put more money in the pockets of the already- rich for a short while; and our masters are taking the long view.

They don’t just want some of your money. They want all of it.

But it’s our government.  We put them there because we know that they’re smarter than us and will look out for our welfare. Yes, some people still believe this.

Little by little, Ireland is being sold off.  And when we do eventually waken from that coma we’ll discover that what has been sold off is the best part of us.  In many ways, it may be the most frivolous part – the part that likes to tell tall tales in the pub.

In other ways, it is more serious.  They want to take away the part of our nature that likes to help out our neighbours.  But once again that doesn’t put more money into the endless, all-devouring pockets of our masters.  And anyway, who has time to watch out for their neighbours any more in this increasingly cold country?

900 house repossessions in the first six months of this year alone?  Call them what they are — evictions.  Well, sorry; not my problem yet.  If I can just keep my head down and protect my own little space then maybe they won’t notice me. Maybe I’ll continue to be given as much freedom as they allow me to have.

People have their own problems, their own growing families to watch out for.  And anyway, it’s the government.  It doesn’t matter that they openly admit that they lied their way to power and never intended to keep even one of the empty promises they made.  They’re too big; you can’t take them on.

Little by little they are crushing us and sucking the joy out of our existence. And we are letting them do it.

In Tim Robbins’s brilliant political satire Bob Roberts, the character played by Gore Vidal tells the parable of the Frog in the Pan of Cold Water. He says that if you throw a frog into a pan of boiling water then its survival instincts will have it out of there in double-quick time.

However, if you place it gently in a pan of cold water then it will sit there docilely whilst you gradually heat the water until it is scalding, leaving the frog to just quietly die a horrible death.

That’s what we have become:  the frog in the pan of cold water.  We are being slowly roasted alive and we don’t even notice it.

For the past couple of years I have helped out in a tiny way with the children’s cancer charity Hand in Hand.  And it has been a privilege.

They need around €250,000 a year to keep going.  In the past two years the number of counties that the charity assists has jumped from eight to twenty; and now for the first time this charity has to turn families away.

When families who have had a child diagnosed with cancer turn to Hand in Hand… they have to turn them away.

Think about that for a moment.

Hand in Hand, which has struggled on for the past eight years solely in order to help families who have had a child diagnosed with cancer, and now does so throughout twenty counties, has finally ran out of options.

Their fundraisers have been tremendous. The good will of those who have organised events has been nothing less than extraordinary.  Yet it seems that these people have finally reached the end of the line.

And this is only one story that could be told by many in the same position throughout Ireland.  One local politician (who—guess what?—didn’t want to be named) told me yesterday that ‘the country simply cannot afford…”

Cannot afford what, for Christ’s sake? Cannot afford to assist in any way a charity that is doing real work for real people whilst they CAN afford to sanction endless pensions and Golden Parachute kiss-offs to chancers that have proved time and time again to be totally incompetent at what they do?

“I know that you’re aware that things are tough right now but we’ve simply reached a level where we are unable to accept any further referrals.  I was awake at 4am, fretting about it.  There is money due in; but it’s not coming quick enough and it won’t last long enough.  We will launch an urgent appeal next week in the faint hope of keeping going.

“It breaks my heart to think that this service – a service that is bloody vital, may be coming to an end. And there is absolutely nothing out there to replace what we do.”

When Jennifer told me that this morning I didn’t know whether to cry or punch something.  A little of both, perhaps.  When you hear a tough lady like Jen saying that her heart is broken, it means something.

By Christ, I break out in a cold rage when I think how infinitesimal the figure we need is, when compared to the billions – literally billions – which our leaders have thrown wastefully away or just channeled off in order to keep funding the bottomless trough at which they feed.

Certainly, Hand in Hand receives nothing from our government.  A few soundbites is the best they ever hope for.

When you are faced with people who felt no remorse at removing medical cards from children who have cancer, it would be unrealistic to expect anything even remotely approaching compassion.

I have tried this past year – really tried – to behave as a Christian would. But when I see decent people like Jennifer or the main fundraiser, Aine, with their backs to the wall no matter how many hours of every single day of every single week that they put in, then I’m afraid that I feel nothing but pure anger towards this uncaring government. And I’m not apologizing for that to anyone.

When you are faced with the likes of Bertie Ahern saying that it would be ‘too complicated’ to hand back the €2,000 a year rise on his pension, then you know that we are on a hiding to nothing.

Yeah, it’s complicated all right. Here’s how complicated it is, Ahern: give this charity the €2,000 that you don’t need and we will make sure that life is made easier for several families who have just been hit with the worst news they will ever get in their lives.

I’m too tired this morning to argue this.  Too tired and too sick at seeing a country I love being ridden into the ground by traitors and money-grubbers who are intent on selling us out just to keep the money endlessly pouring into their greedy pockets.

It’s well past time to take ourselves out of the simmering pan of water.

It’s well past time we took our country back.

You can email me at chasbrady7@eircom.net or reply to this blog. You can read up on the charity at www.handinhand.ie