Buccaneer of Bullshit Boldly Bounces Back 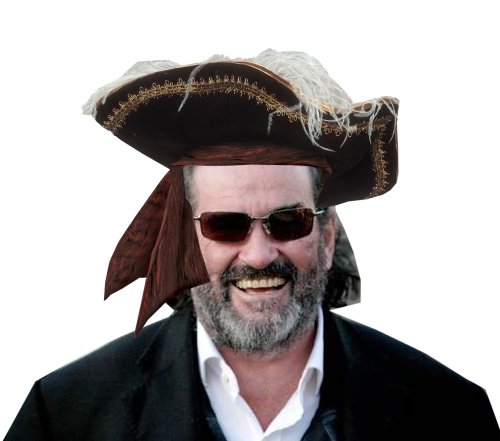 Buccaneer of Bullshit Boldly Bounces Back

I know that I often find myself puzzled by what goes on around me.  It often seems like I’m watching the workings of a parallel universe:  one that’s a little bit– but not quite– like ours.  Yet even by those standards the reporting on Johnny Ronan officially exiting the National Asset Management Agency (NASA) this week is bizarre.

It’s like we are giving a hero’s welcome back to this guy. Why?  He’s just another chancer who was reckless with other people’s money and ended up owing a fortune.  The big difference to what would have happened to you and I is that he was never forced to declare himself bankrupt or find himself evicted from his home and on to the pavement.

Back in the day he was the Celtic Tiger poster boy and had the newspapers sucking up to him with breathtaking obsequiousness, all the while they fawned over him as ‘the buccaneer’.  I think it had something to do with that carefully cultivated streak through his long hair.

Or maybe because he allowed what passes for celebrities in Ireland to hang out around him, picking up some of the crumbs that he dropped from his groaning table; yes, even after he was NAMAd, to the bafflement (but sadly not surprise) of Paddy and Bridget Q.  Sucker.  You know, the odd trip away for Rosanna Davidson or Glenda Gilson, the kind of Z-list celebrity that Ireland throws out so readily.  There’s Rosanna, famous for getting her kit off because creaky old Hugh Hefner offered her a shed load of Playboy money and because she once gave her opinion that she and her dad Chris de Burgh were married in a previous life – which is creepy on so many levels.  Then there’s Glenda, who of course is famous for – oh, OK. I admit it; I don’t really know.

Still, their names were trundled out again this week by a breathlessly happy media because Johnny the Buccaneer is back.

Anybody else, they would have been declared a bad debt for years to come.  When bad times happen to most people they don’t get the chance to make a comeback – and these wouldn’t be people who had landed €600 million on the taxpayer.  But this is Ireland and the Ronan’s of Ireland are treated differently.  They will never be hounded to suicide or go wanting.  In fact NAMA actually – far from letting him pay them back immediately—started giving him money to look after his office.

There’s much talk of who has backed Johnny-boy in his comeback.  We’re hearing about US investment firm Colony Capital and the UK M&G Investments, but let’s be honest here.  If you believe that he didn’t have some offshore nuts squirreled away for a rainy season then you probably think that he is going to devote the rest of his new life to handing out tenners to the poor.

And you know what?  If that’s libelous, sue me.  This country is so corrupt that I couldn’t care less at this stage.  That yoke has had to pay back nothing like what he owes.

Out of the frigging wide blue yonder he comes up with €300 million and it is business as usual.

Guy Leech –what a wonderful name!—organised the settlement and said:

“The Ronan Group has been in NAMA for five years and it is a great achievement to have exited, repaying its debt to Nama and delivering a substantial profit to the Irish taxpayer[! What about the rest?]…

“John Ronan has now returned to development in Dublin and will deliver more of the high quality properties he has been well known for over the last 30 years.  Ireland needs more quality housing and office development and the Ronan Group will meet that need.

“This was a highly complex transaction [translation:  ‘the level of skullduggery involved would be too difficult for the little people to understand – we hope’] which has been put together thanks to huge efforts from Ronan Group Real Estate’s, the new funders, Nama and from all their advisors who have shown tremendous commitment and tenacity to get it done.”

And what’s more, the wonderfully-named Mr. Leech said it all with a straight face– although he admittedly had his fingers crossed behind his back.

If you are one of the many who have found yourself bankrupted; or unable to take recourse in social welfare because you were once self-employed; or who were evicted; or who find themselves unable to use a credit card for years to come; or who live in dread of the next bill dropping through the letter-box—if you are one of these unfortunate people then take heart in The Happy Tale of Johnny Ronan, the Buccaneer.  For, just as with Johnny, the State is waiting to give you a hand back up.

And if you buy that one, then you really do believe in fairy stories.