As Long as We Behave like Saps, We Can’t Complain when We’re Treated as Such 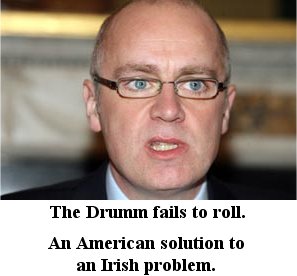 I’m an unapologetically vindictive bastard and never pretended otherwise; so this is a good morning for me.  Well, at least it’s a start.

Thanks to America –nothing to do with us, we didn’t have the balls to go after him—David Drumm wakes up today in the knowledge that he is no longer able to run from his old muckers at Anglo Irish Bank, Irish Nationwide and the many others that he’s been trying to get out of paying.  Thanks to America they can go after him.

Judge Frank Bailey said, amongst other choice things, that he was telling ‘outright lies’; that he was not even ‘remotely credible’ and that his ‘conduct [was] both knowing and fraudulent’.

Having written about Drumm in the States in a New York magazine for the guts of two years, I’m going to reprint an article from that time.

One final thought: since he is now a known perjurer, will the F.B.I. be getting involved?

I’d like to think so; but we should be ashamed that we didn’t deal with this gouger years ago.

“Whether we are destroyed by a process of social collapse or by the explosion of nuclear missiles, the fault will lie ultimately with us – in our capacity for self-deception and our unwillingness to deal directly and courageously with the realities and injustices of our daily lives.”

From Michael Moorcock’s brilliant political polemic “The Retreat from Liberty”.

I really wish I weren’t the type of person who says: I told you so.  But in fact I LOVE to say: “I told you so”. If that makes me petty, too bloody bad.

Yet I would be willing to admit I was wrong if it meant that the totally corrupt creature that calls itself David Drumm was doing time now, as I recommended over two years ago. It’s that long since I started, in this column, to ask why Drumm and his fellow criminal Sean FitzPatrick – who were only two of the chancers who were up to their jock straps in skulduggery through the disgraced Irish Anglo Bank – have not been brought to task for the millions that they now owe.

Don’t tell me that we couldn’t have had them banged up at least a year ago. Don’t tell me that The Powers That Be couldn’t have used some imagination in tackling these spongers instead of the Law passing the buck to the Politicians who were paralysed with fear in case their own shady dealings with crooks emerged before they then passed it onto their mates, the Bankers.

“Oh sure, they were to blame for everything”, wailed Bertie Ahern, Brian Lenihan and Brian Cowen. “They weren’t telling us everything and we were just a group of poor gombeens that didn’t really understand the manoeuvrings of these bad guys. If we had we would have put a stop to it.”

Oh pass me the sick bucket: do they think that we have forgotten how cosy the politicians have been with the bankers and the builders and the developers and the cursed speculators for decades?

THEY ALL SLURPED FROM THE ONE TROUGH! All of them, the unredeemable swine that they are.

I must have sounded like a broken freakin’ record over the last two years. All I’ve been asking is that they treat these gangsters in the same way that they treat the poor sods that can’t afford to pay a fine or have done a dodge on their T.V. license.

There’s no problem about jailing the guy who is cleaning windows in his spare time, so why can’t we jail these big shots?

Now Dunn has outmanoeuvred the saps of Ireland and is laughing clear and loud – along with the swizzle-sticks who helped him – at the idea that because of the law in America he will continue to give the middle finger to the Irish yokels that he stole money from.

And make no mistake, America: he is laughing long and hard at you also.

While the Irish taxpayer is now stuck with a bill of €35 billion this former chief executive has declared himself bankrupt – in the United States.

I do so love that “up to” phrase; and how crooks must like the way that their forms are worded in such a way that they can be as economical with the truth as they wish.

Speaking as one who saw his pension here wiped out, I just see pure blood red now that not only does Drumm get to keep his multi-million gaff in the States but because the bankruptcy laws there are more easy- going than here (Jesus wept!) he will also keep his pension.

I don’t really blame you for giving the Irish a kick in the nuts, Drumm; nobody could say that we don’t deserve it. We’re soft and scared when it comes to “powerful” people like you, after all. When it comes to people like you there are still thousands who will talk tough at the bar counter but be the first to tug their metaphorical forelocks when they come in contact with their “betters”.

Damn those cowards to Hell also, while I’m at it.

Maybe there really IS something to that whole “eight hundred years of colonialism” bull that is pulled out every time we get the chance to put away one of these money-grubbers. Why do the Irish immediately get nervous when they have to confront thieves and gougers face on? Already wealthy ones, that is.

Forget the English and perfidious Albion. It is the Irish themselves that are now responsible for the many evictions here; for people living in fear of jail because they have fallen behind with the electricity bill; for those who have committed suicide because there is just no more hope – and anyway, that was Ahern’s despicable recommendation to them.

You can’t blame the Brits this time. This is all down to the Irish sticking it to their own.

I’m going to say it one more time because it always bears repeating: the real thieves and criminals will never EVER go to jail in this country. It just won’t happen.

How could it? That would open up far too many cans of maggots here. The banks and the politicians have been inextricably linked for a long time now. If we start outing even one, who knows where it will lead?

I like to think that they, every damned one of them, are as nervous as bejeesus now; because it will just take one mouthpiece to bring the whole cardboard house down.

I live in hope for something approaching justice as I write this on Sunday morning [Optimistic git, wasn’t I?] because I hear that Drumm is getting ready to open his yellow beak and start singing. I hope that’s true. I hope that he says he wasn’t in this on his own and I hope to hell he starts naming names.

I also hope that his neighbours in Cape Cod realise that they have a viper in their midst. It can’t be too nice to stay in a very pleasant enclave where nothing much ever changes and then suddenly you find yourselves having to look out of your window in the morning and see a different set of Irish hacks every day trying to get an interview with one of your neighbours: a man whose very name – David Drumm – has become a byword for corruption back here in Ireland.

He may have gotten away with his loathsome behaviour here, but that doesn’t mean that we ever have to let him forget it.

Mr. Moorcock was right in his splendid eighties pamphlet: we have no one to blame but ourselves. 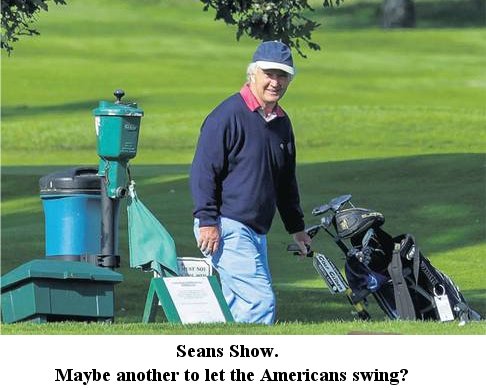