Launch of the Cong Festival 2014 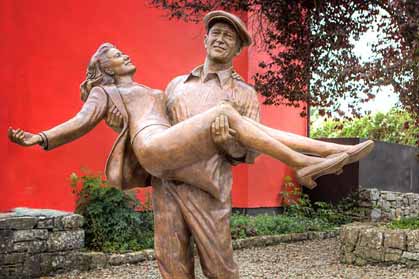 Launch of the Cong Festival

I happened to be looking at Paddy Rock’s face on the evening of the 10th of September when Jennifer Carpenter said:

“Eventually you run out of favours to call in.”

That little tic at the side of the cheek; that intangible shadow that a frown seems to cast; these things tell you that here is someone you will have to talk to later; because he’s just heard a statement that has touched a nerve with him.

I’m getting a little bit ahead of myself here, though.

To bring you up to speed:  Jennifer, Deirdre and Your Humble Narrator were invited to Mayo a couple of weeks back for the launch of the Cong Festival which took place in the Lodge at Ashford Castle and which will run in the village of Cong itself from October the 9th through the 12th.

I would of course love to tell you that this kind of thing happens to us all the time, but alas!

However, in this instance the Cong Festival 2014 is supporting two charities and I’m delighted to say that Hand in Hand is one of them.  That is the children’s cancer charity that Jennifer is Development Manager with and which Dee and I volunteer for.

Well, that’s what it was like at this launch.

What a buzz of enthusiasm. What a terrific group of people. And what a stunning setting to promote their festival in.

These were people for whom the Festival is not just a project:  to the likes of Patrick Luskin, Ray McHugh, Paddy Rock, Mairead Geehan from the Lodge or the many community members that I just didn’t have the chance to meet, this is a labour of love.

When you stop and think about, isn’t it incredible that a movie that was made back in 1951 inspired a purity of passion that is still felt more than six decades later?

That a film like The Quiet Man— which probably seemed slightly corny even at the time, became so much more than just another film– is in itself remarkable.

Forget the naysayers:  sure, there’s stuff in there that belongs in no real world; but I’m talking about its overall theme of a common decency in people that is portrayed in every single performance; and of course that is going to hit home to anyone who works with Hand in Hand.  Without decency and a feel for the universal good we would not be able to do what we do.  Simple as that. So if The Quiet Man is corny then let’s have a bit more corn in the world.

And what a humbling notion: when I first saw, at the innocent wee age of nine, director John Ford’s nod of the head to a country that he had loved all his life, how could I have possibly dreamt that that the charity that I love would be benefitting from a share in Mary Kate’s Dowry, the fundraising draw that will take place on Sunday the 12th.  And how could anyone ever forget the great Maureen O’Hara as the fiery Mary Kate?

We have grown so damned sophisticated in our own heads that we dismiss the simple values and good neighborliness and—dare I say it?—human compassion and love for each other that this movie expounds.

But if I wanted any more proof that people are innately good than I get every day just as a matter of course in working with Hand in Hand, then I got it at this launch.

When the Festival itself starts then perhaps I’ll get around to introducing you to some of the colourful characters that we met a fortnight ago.

For the moment, though, I’ll mention one person who exploded into Hand in Hand’s stratosphere like a haymaker from Victor McLaglen.  And that’s Niall Rochford, the indefatigable, the egregiously generous, the all-around good guy and extremely supportive friend to us who donned his best suit and fearlessly took on the Ice Bucket Challenge in our name.

That he was responsible in only a few days for making over €1,000 speaks volumes for the man. That goes without saying.  That Red Carnation— the people who now are in charge of Ashford Castle and the Lodge– employ people not only of the caliber of Niall, but also the staff members that we met last night ( with a particular nod to their chef-cum artist or even the other way around, Jonathan Keane) — says a lot about them as a company. It’s little wonder that Cong has been so pleased to welcome them.

Niall said that the whole area has been galvanized by this festival; and that whilst it has been difficult and time-consuming, it has been great to have played a part in something that is raising the profile not only of the area but of the two charities that will be benefiting—the other being Madra, the Dog Rescue Centre.

This will be the inaugural festival for the Hands of Fame, which will now become a yearly event.  Ryan Tubridy is the first to have had a cast made of his hands in honour of his contribution to Irish culture and the immensely likable RTE celebrity (and film fan!) will be there for the unveiling on the site of the Quiet Man Statue, again on the 12th.

We ourselves were delighted last night to be told by Paddy Rock and Patrick Luskin that the symbolism being made use of with Hands of Fame and Hand in Hand wasn’t entirely coincidental.  In fact I’d go a little farther and say that we’re mightily chuffed.

Finally and for the moment, I’ll go back to the beginning:  that little twitch in Paddy Rock’s cheek and Development Manager Jennifer Carpenter’s short introduction at the launch, both of which I found so interesting.

Jen started by thanking Niall for his contribution and agreed that indeed the Ice Bucket Challenge should have been renamed the Iceberg Challenge in his case, considering the size of the lumps that were bounced off his head.  She went on, in part:

“We are delighted to have your invaluable support behind us, especially in the light of the complete absence of State funding.  It takes a lot to keep a child stable; and since treatment tends to go on for years rather than months, eventually you run out of favours to call in.  For that reason alone we are eternally grateful to all who have been involved in choosing us as one of the charities who will benefit from your generosity.”

“Despite being delighted to help out Hand in Hand it is a pity that some of our politicians appear to be blind to what these people are trying to do.  Hopefully we’ll eventually get a Minister for Health who understands the need to help charities like this.”

I spoke to Paddy later and was impressed by his depth of feeling regarding this.

It’s something that I’ll be returning to in my own columns elsewhere; but for the moment all of us here would just like to say a huge ‘thank you’ to all who were involved in last night’s launch.  We’ll be keeping you up to date with the festival but in the meantime you can find further information at: