This piece appears in Chicago’s ‘Irish American News’ magazine for

Wasn’t that a weird and wonderful carry-on last month, just the same?  It certainly added to the gaiety of the nation!  And on top of that, just to give a nice added dimension to it, we got to see a few characters as they really are.  In fact we fairly ran the gamut from vanity, preening self-importance, narrow mindedness and an inability to take criticism all the way through to cowardice—which is where our national broadcaster really excelled itself.

John Waters, the Iona Institute, RTE, Brendan O’Connor…was there anyone who came out of this well?  I don’t mean with just some extra greasy loot in the bank; I mean did anyone emerge well?

If you missed this malarkey, it all started with the aforementioned journalist and host of ‘The Saturday Night Show’ Brendan O’Connor.  As one of the guests for his show he brought on gay activist Rory O’Neill, who made the acceptable point that homophobia isn’t tolerated here.

Well, it is still a small country after all and most of us have gay friends or at least acquaintances, so he said:

“It’s very hard to hold prejudices against people when you actually know those people.  [The only place] “where it’s okay to be horrible and really mean to gays is on the internet—in the comments—and, you know, people who make a living writing opinion pieces for the newspapers.”

Now, so far there’s not much in there that you could find something to argue over; except that naturally I would add that it is certainly not okay to post hateful remarks on internet forums.  However, since you are dealing there in the main with the kind of cowardly swine who tend to send their ignorant, thuggish and often brutal comments out there, before beating a hasty retreat behind either a pseudonym or even the mask of outright anonymity, we are into a different argument altogether.  I simply argue that such creatures should be ignored completely.  If they feel the need to dip into their pathetic little pots of vitriol and then feel an equal need to hide their identities, then I feel the need to treat their remarks with the disdain that they deserve.

So far, so harmless; but then the interviewer astonishingly, given the extreme (and extremely ridiculous) Irish libel laws went on to ask Mr. O’Neill bluntly:  “Who are they?”

I would imagine that behind the scenes there was a producer spluttering into his coffee and a few RTE executives suddenly pricking their ears up and looking like a panicked herd of deer.  And it was here that the interviewee named names—as he had just been asked to do by RTE’s representative.  And so, from the mainstream, he mentioned journalists John Waters and Breda O’Brien, who in fairness are not the type to hide their lights under a bush.  He also, to my delight, mentioned that heretofore little known Catholic lobby group The Iona Institute.

I say that I was delighted, because anything that makes the ordinary punter more aware of the utterances of that crowd is fine by me.  I think that the Iona Institute should be allowed to lecture us just as much as they want on what they see as the evils of same-sex marriage and by extension on equality.  They are a small group who have consistently taken the moral high ground in preaching to us on what they perceive as being good for society.  And I’m not the only one who doesn’t like being spoken down to by people who follow a different set of rules to me.  If they want to live a certain way, that’s fine:  just don’t try to influence society on my behalf.  So if it shows them up for what they are, then let them away with it. Of course, this is RTE we’re talking about, so the idea of just letting them hang themselves by their own words didn’t come into it.  Panic had set in.

That panic got even worse when within hours John Waters and The Iona Institute had their lawyers onto it– and the fight was over before it had even begun.  Now I can’t really comment on Breda O’Brien as I’m not all that familiar with her writing, but I do know that she has certainly never been remiss in having a go at those that she felt deserved it.  As for Waters, I often read him and at least in the past have often enjoyed his column.

But who knew that he was such a delicate little person, so easily offended?  It’s not as if he has been slow to point the finger himself in the past; but it seems that whilst he can dish it out, he certainly can’t take it.  So there was no room for the debate that he used to pretend to love:  this time it was simply over to the lawyers, who must have been plain delighted with themselves.

In an utterly craven manner RTE gave in. Initially they payed out ‘an undisclosed sum’ to the wounded shrinking violets for the upset to their feelings; later we were grudgingly told that it was in the region of €85,000. Writer Damien Kiberd, talking about RTE and this “enormous threat to free speech”, put it:

“Sitting on €180m a year in unearned income from TV license fees plus another €160m in commercial revenues, the organisation’s claim that its actions will protect taxpayers’ money is risible… A vastly-resourced enterprise has capitulated without firing a shot in the face of a de facto class action launched by a modestly-resourced lobby group.”

That small group campaign against even a suggestion that same-sex marriage be legalised; whilst Waters is on record as saying that it is “a kind of satire” on conventional marriage. So we should have had a chance to at least hear them defend their stance against equality.

For myself, I’m glad that not one cent of my money went to paying anything to this bunch.  When I hit hard times three years ago, I got rid of ALL TV channels–including RTE– on the basis that I needed to save money.   I kept the set for the purpose of watching DVDs, that’s all.  And as things improved I found that I didn’t miss those channels.  That didn’t stop three years of harassment by inspectors who say that if “you have a TV, then you must have a license, whether you have channels or not.”  In 2012 alone almost 300 citizens went to jail for non-compliance and I had fully expected to do so also.

So I turned up in Galway last week, bag already packed, only to have the sensible Judge Mary Fahy throw the whole ridiculous affair out of court.  She may have been as puzzled as I was that it ever went that far anyway.  Of course, I do expect the harassment from TV inspectors to continue, but that’s fine.  Unlike the above mentioned group, I’m not a delicate flower.

As I say, I’m glad that not a cent of mine went to The Iona Institute.  As for John Waters, I’m just disappointed. I’ll find it very hard to take anything he writes seriously again.

You can email me at chasbrady7@eircom.net or read my blog on www.charleybrady.com 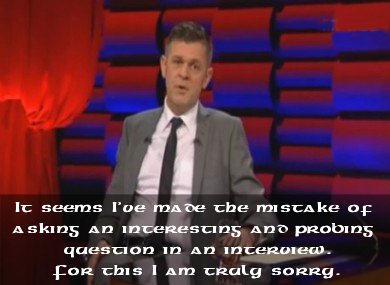