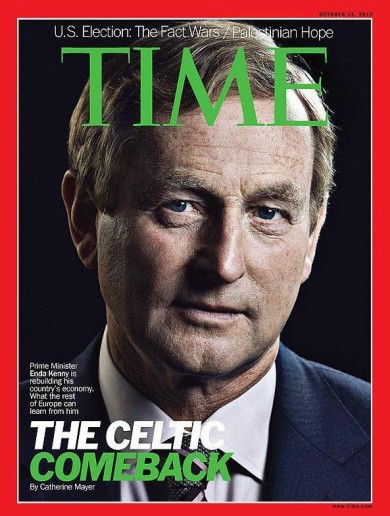 I honestly thought it was a joke at first. Well, you would, wouldn’t you?  I mean, there was the famous masthead—in green—of Time magazine.  And there was the face of Enda Kenny, Ireland’s hopeless and hapless Taoiseach, right there on the cover.  There was no scenario under the sun in which these two elements came together in huggy-happiness.

Then your eye wandered down in some confusion to the headline:  THE CELTIC COMEBACK.  At this stage you could feel a smile coming onto your lips but you were still looking around to make sure that you weren’t the victim of some hidden camera skit.  Then in smaller writing it says:  What the rest of Europe can learn from him.

Him. Meaning yer man on the cover. Him.  Enda bloody Kenny.  At this stage you were nearly in pain with trying to hold the laughter in.  You were bent over with your hands on your knees, silent guffaws threatening to erupt into outright laughter.

Photoshop, eh?  Just amazing what they could do these days.  A bit of a mean joke, mind you, that crack about what Enda could teach the Euro-zoners, what with him having the begging bowl out to Germany again in the same week.  How long will it be before we have to have a Bertie Ahern-style whip round for an operation to have Kenny’s lips surgically removed from Angela Merkel’s backside?  This was all careering around your poor old head, like.

Then your neighbour poked his chin over your shoulder and said:  “Unbelievable, isn’t it?  Can you believe that waster’s mug on the cover of Time?”

And you knew that it was all true; hideously, unbelievably true:  God did have a sense of humour.

Of course, it’s not in the least bit funny.  Having Kenny on the front of the European edition of Time will be very damaging for us in the long run, no matter what the spin doctors are happily telling us. I mean, what if people take this seriously?  Sure, Time and Newsweek might not be the big deal that they once seemed to be but their names are still heavy; although I don’t personally know anyone—well, there’s one but he’s a bit of a looper, to be honest—who would buy it on anything approaching a regular basis.  Admittedly this issue has sold out here but that’s down to curiosity value. That, and the fact that we have no shame, of course.  Those readers aren’t too likely to return next month.  As for Newsweek, I haven’t taken that seriously since the 2010 issue where they told us that Brian Cowen—Brian Cowen, for heaven’s sake!— was one of the ten most influential leaders in the international community.  We just scratched our heads at that one and wondered how we could be going so rapidly down the toilet when we had such a recognised Big Brain working for us.  I mean, even when he was half in the bag at eight-thirty of a morning that Big Brain was working tirelessly on behalf of us. It had to be so; it said it in Newsweek.

The author of the piece, Catherine Mayer, who is also the European editor, seems to have been completely smitten by Enda. (Go on, Enda, ye charmer!  And we used to just think that twinkle in your eyes was because ye were having a good old laugh at us!) Well, I don’t know how else to explain it.  You know that word ‘gush’ that romantic novelists use a lot but you can’t imagine what it really means?  Well, that’s what Catherine does when explaining her motivations for the article.  She gushes; I don’t know what else to call it.

“He’s certainly endearing and has a slightly childlike quality to his enthusiasm,” gushed Catherine.  “There was a moment, when he was showing me around his office and showing me absolutely everything, including all his photos, where you found yourself thinking that he was sweet.”

Sweet.  Do you hear that?  He was showing all his photos—the wife, the little kiddies, him in his jogging shorts, whatever—and he was sweet. 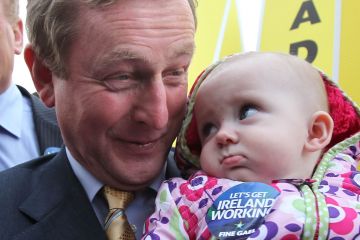 Did you try going outside his office and asking some people in the street—you know, the taxpayers, the unemployed (more of them again last month), the ones who are…yeah, hold on a minute.  I’ve got one for you. Some time back I was talking to a lady who lives near me.  She was a little down, to put it mildly, because she had just seen off the fourth of her kids who were emigrating abroad, looking for work that certainly isn’t here– despite Time magazine’s remarkable Celtic Comeback.  I bumped into her yesterday for the first time since.  “It doesn’t get any easier, but I know that there’s nothing here for them.”

I asked her what she thought of the ludicrous Time article and she looked at me as if I had sprouted another head. “Are you telling me that was true?” she said.  “I thought that was just a wind-up.”

I didn’t ask her if she would describe Enda as ‘sweet’ but I’m pretty sure of the answer I would have got.

Anyone who takes the simplistic view that this is a ‘good thing’ should really come and live here for a while.

“What I was really trying to see was what was behind the likeability”, Catherine continued to gush.  “In small groups he is much more fluent and compelling than he would appear were you to judge him from his big media set pieces.  When the cameras train on him he seems to freeze up, which is an interesting problem for someone in that position.”

Seems to freeze up?  So would you if you were terrified that a hard question might be coming your way and you didn’t have a damned thing to say.

Sweet Enda Kenny:  he sat in opposition for twelve years.  When he got into power he was going to rock our world.  Promises had been made and would be kept; sure, no better man.

It took less than a year for himself and Eamon Gilmour to renege on every one of those promises.  Gilmour doesn’t concern me because he won’t have a party after the next election.  He and his cronies will be gone the way of the Ghastly Greens.

But Enda? Well, never mind, we had the opposition TDs in the Dail to do what we pay them for and come out with some tough statements.  Step forward Independent Mattie McGrath, best known for his adolescent heckling.  Mattie was fierce annoyed at this media coverage of a chancer.

Mattie didn’t gush; by God, he thundered: “THE MOST SICKENING THING LAST WEEK WAS TO SEE THE TAOISEACH ON THE FRONT PAGE OF PLAYBOY MAGAZINE!”

As one internet wag was quick to point out, it really should be easy to tell the two publications apart.  There was only one tit on the cover of Time.  It takes two to get on the cover of Playboy.  It does make you wonder what’s going through the minds of our elected representatives when they’re sitting there deep in thought, just the same.

Sweet.  You couldn’t make it up. 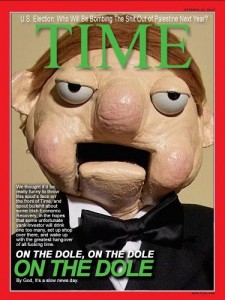