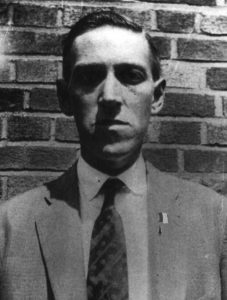 Well now, I’m not the better for that!  In fact, I’m almost sorry that I came across this correspondence from 1918/20.

You see, I’ve been a lifelong devotee of the writings of Howard Phillips Lovecraft (1890 – 1937) of New England.  When I was a schoolboy in the 60s and 70s he was pretty much a fringe writer; but today, entire academic treatises are devoted to him.  Indeed, he is now regarded as an exponent of weird fiction on a par with fellow American Edgar Allan Poe.  To my mind he surpasses Poe, but that’s another day’s work.  And, although unknown to any but a handful of enthusiasts during his lifetime, from our vantage point his enormous influence on 20th and 21st century imagery simply can’t be denied, the word ‘Lovecraftian’ having entered the language and with even mainstream writers such as Joyce Carol Oates and Gore Vidal casually mentioning his work, with every expectation that his name will be recognised.

His entire fictional output only added up to a little more than three volumes of short stories.  Yet it may happen that he will eventually be remembered by history for his tireless correspondence.  Leading Lovecraftian scholar S.T. Joshi gives a conservative estimate of his total output at 87,500 letters, out of which around 10,000 survive.  If they ever all see the light of day then this will amount to a staggering 100 volumes. (These weren’t short letters, either:  HPL could rabbit on for anything from a dozen pages to seventy.)

The reality that I’ll never live to see the publication of them all used to be a source of regret to me; but after coming across a sort of inner correspondence of seven letters within a larger one to the young intellectual Alfred Galpin, I’m not so sure I’m bothered.  It all started out quietly enough:

“The only shady characters on our side are the Sinn Feiners, and Gawd knows we’re ashamed enough of them…. In 1914-1916 I laboured with a ‘literary’ club of Micks who dwelt in the dingy ‘North Side’.  The brightest of them was an odd bigoted fellow named Dunn [bigoted!  From Lovecraft!].  He hated England and was a violent pro-German — & I was foolish enough to try to convert him – as if an Irishman could see reason!”

From the little I know of John Thomas Dunn (1889 – 1983), he seems to have followed his own principles.  When he refused to register for the draft he was sentenced to 20 years in prison, but was released after WW1 and became a Catholic priest.  Just one of those little snippets of history that continue to fascinate.

In 1920, though, Lovecraft really got going:

“I have recently joined the Loyal Coalition of Boston, which is fighting the Sinn Fein movement in America…the object is to combat with propaganda the deadly and insidious campaign of Irish hyphenates to intimidate our venal and vote-craving politicians into recognizing the mythical ‘Irish Republic’ and thereby committing an international crime against that friendly power and motherland whose continued friendship means more to civilization than anything else.  Few realise the perilous nature of the agitation which criminals like that mongrel wretch De Valera are conducting against Anglo-American harmony… These Irish malcontents, with their vast power to ‘swing the Oirish vote’, must be killed off or throttled somehow.”

Although young, Alfred Galpin was something of a prodigy and along with Texan writer Robert E. Howard, was too much of an individual to simply agree with the older Lovecraft, something that didn’t sit well:

“I suspect Galba will have a sneer ready – but these Micks have got to be crushed despite the sneers of all the 18-year-olds in or out of the nursery!”

“Concerning Ireland, I would ask…what he means by ‘rights’.  What ‘right’ exists on earth, save that of strength?  If the Irish had the ‘right’ to independence they would possess it.  If they ever gain it, they will possess it – until they lose it again.  England has the right to rule because she does… It is not chance, but racial superiority, which has made the Briton supreme.  Why have not the Irish conquered and colonized the earth if they be so deserving of regard?  They are brainless canaille.  Galpin asks why he should worry how hard a time the powers of Europe have.  I will answer, because their overthrow would mean the overthrow of art, science, literature, and civilization.”

It’s a pity that Galpin’s side of the correspondence hasn’t survived, as I would have liked to see it.

“I would like to disillusion Galba regarding his ‘brilliant and downtrodden’ Ireland.  So far as any evidence goes, the majority of men who have brought eminence to Ireland are nearly or wholly Anglo-Saxon by blood.  Lord Dunsany [who Lovecraft admired as a writer] is frankly an Englishman, with not one drop of the Celt—a Cheam School, Eton, and Sandhurst man whose voice and accent are as Londonese as any I have ever heard, and whose sympathies are ardently with the Empire.  Even the self-conscious ‘Irish’ intelligentsia are nine-tenths Anglo-Saxon, including Yeats, Synge, and everyone of any reputation.”

It’s difficult for me to read this.  As I’ve said, I’ve had a lifelong admiration for the fiction of HPL; and in fact I contribute articles on him to the excellent ‘Lovecraft eZine’; but, ye gods! This makes for uncomfortable reading.

It also confronts me to an extent with my own hypocrisy:  I’ve known for years that Lovecraft was a racist and a rabid anti-Semite.  Nor is this something that can be argued against by saying that he was a product of his time.  His rants go well beyond that.  Yet I felt it was just part of his enormous complexity as a human being.  After all, he seemed to be an equal opportunity hater.  It’s not as if he stuck to just belittling any one particular race: he didn’t like human beings in general, even intensely annoying me by dismissing the brilliant poet Robert Burns as ‘an overrated Scottish peasant’.

And he had Jewish friends who liked him and tolerated his views.  He even married a beautiful Jewish woman, Sonia Greene – hell, I can only think that she was a living saint for putting up with him for even two short years.  I doubt they felt short to her.  Complex wasn’t the word for this man who could be so incredibly kind and generous with his time to younger writers, no matter their race or background.  And to be fair, his extreme views softened somewhat towards the end of his 47 years on earth.

Yet simply because it is so close to home for me, the above excerpts – and there are lots more — have hit me hard.  And whilst I will always admire H. P. Lovecraft’s fictional output, there is no doubt that this will colour my view of his work.

Yes, I’m almost sorry I came across it; but it is important to examine those you have admired and to see them for what they are.